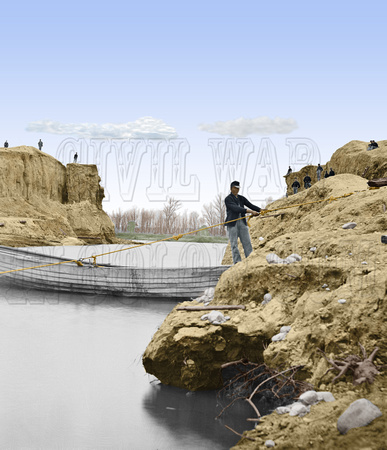 "It was as deliberate an act of self-sacrifice and valor as was ever performed in our country or any other," said one of Lt. Walter Thorn's superior officers

On January 1, 1865, Lt. Walter Thorn earned the Medal of Honor. His act of valor occurred when Union Gen Butler and his staff came to watch the explosion that would release the James River into the newly constructed Dutch Gap canal. The canal would enable US warships to bypass confederate batteries on the river route to Richmond.

Six tons of black powder had been prepared for the explosion.

All the troops had been removed except for the few whose duty it was to light the fuse and escape.

The supreme moment had arrived. The fuse had been lighted, and the officers were standing in a group at a safe distance discussing the question whether the work was to be crowned with success.

A member of General Butler's staff galloped up and shouted excitedly: "Has the guard opposite the bulkhead been withdrawn?

Somebody answered, hardly articulately, rather with a sort of gasp: "No!"

There was a score of men in the guard. There were tons of powder beside them. Fire was eating its way up the fuse and might at any second set loose the terrific force of the mine.

The bravery of the officers before whose minds those thoughts flashed could not be doubted — it had been proved too often for that —but to go and warn the squad seemed so utterly beyond reason, so surely a useless throwing away of another life, that they stood there rigid and pale, with one exception - Walter Thorn, first lieutenant of the U. S. Colored Infantry, who hesitated, but only long enough to form a resolve. Then he dashed off in the direction of the bulkhead.

Perceiving his intention, his fellow officers called to him to return — warned him, pleaded with him. Paying no heed, he ran on, reached the bulkhead, climbed to its summit, faced the storm of bullets that the rebels directed at him, and stood there until he had ordered the picket guard to flee to a place of safety.

He leaped from the top of the mine; the explosion took place; the earth was scattered in all directions and a great abyss remained, but the young lieutenant was unharmed.

Disappointingly, as the bulkhead disintegrated, the explosion flung the earth almost 100 feet into the air, landing where it continued to block the James River from entering into the canal, defeating the purpose of the project.

Even worse, with the bulkhead gone, the Confederates could now see the entire length of the canal, giving them a better view of their targets!

At this point, the project was abandoned. The troops were reassigned. Two weeks later, the rain swollen James River punched a ten foot opening into the canal, allowing its use for small vessels.

In this image we see a small boat being used as a "scale" to illustrate the size of the opening. It wasn't until after the war that the canal was properly completed. Today, the Dutch Gap Canal is the main shipping channel for the James River.
© History In Full Color
User Agreement
Cancel
Continue