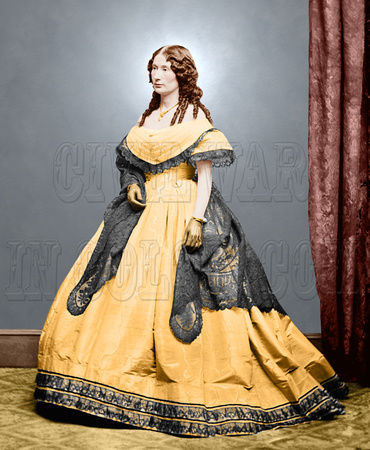 Most remembered for one performance, on one night, Laura Keene was the first successful female theater manager with any real power. Born in England, in 1826, she was married at 18 and had two children before her husband left her when she was 25. She made her theatre debut later that year near London. She quickly became very successful. Within two years Keene was managing, directing and performing in a series of plays. She traveled to Baltimore in 1853 for her American debut. At this point, she had only been acting for just over two years. Keene continued her success with performances in California and Australia before returning east and leasing a theatre in New York in 1855.

The following year she had her own theatre built, where she performed and controlled until 1863 when she decided to begin touring again. “Our American Cousin” debuted at her theatre in 1858, in an age when a dozen performances was considered “long running”. Under her direction, the play shattered records and set new standards. In New York, it ran for 150 performances before its debut in London where it ran for another 496! So successful was that play that several of the characters got their own plays in a series of spinoffs.

It was during a benefit performance in 1865 that Lincoln chose to attend. It should be noted that it was Laura Keene herself that was the beneficiary, in that all proceeds from the performance were reserved for her. This was an honor and expected to draw great crowds. When Lincoln announced he would be attending, Ford knew he had a sellout. About halfway through Act III the funniest line of the play was delivered:

Booth waited for the audience reaction to that line to pull the trigger. After he escaped, Keene made her way to Lincoln’s side and held his head in her lap till he was taken across the street. Following the assassination, she continued her career until she had a hemorrhage while on stage in 1873. She survived for a few more months but never recovered and died a few months later at the age of 47.
© History In Full Color
User Agreement
Cancel
Continue