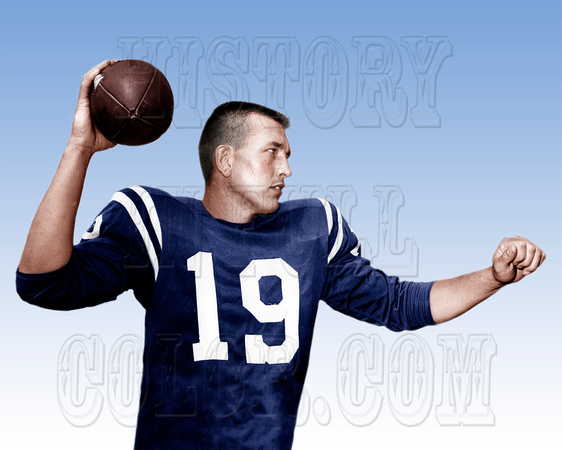 “There is a difference between conceit and confidence. Conceit is bragging about yourself. Confidence means you believe you can get the job done.” - Johnny Unitas

Unitas led the Colts to NFL titles in 1958 and '59, was chosen to five all-league teams and was Player of the Year three times. He played in 10 Pro Bowls. He threw at least one touchdown pass in 47 consecutive games, an NFL record streak that began in his rookie year. He was elected to the Pro Football Hall of Fame in 1979.

For the man who would be known as “The Golden Arm”, there was a time when it was doubtful that he could get a spot on any football team. Unitias at 138 pounds, was considered to light to play for Notre Dame University and had to take square dancing to keep his scholarship at the University of Louisville. After being dropped by the Pittsburgh Steelers too late in the season to get another NFL spot, Unitias worked in construction and played semi-pro ball.

In 1956, Unitas joined the Baltimore Colts. "The most important thing of all about Unitas," said Weeb Ewbank, his Colts' coach, "is that he had a real hunger. This was a kid who wanted success and didn't have it so long that he wasn't about to waste it when it came."

With the Colts, Unitas quickly went from a guy playing semi-pro football to becoming a football legend; earning his place in the Pro Football Hall of Fame.
© History In Full Color
User Agreement
Cancel
Continue