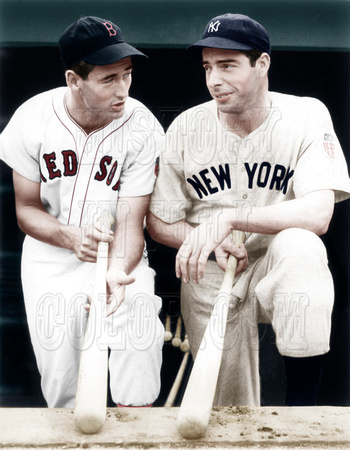 “DiMaggio was regal. But Williams was real. Joe D met the world like an icy myth of a starched man and liked it that way. Ted wore his rough edges and his opinions on his sleeve.” - Tom Boswell, Washington Post

On December 11, 1951, Joe DiMaggio announced his retirement from Baseball. During the press conference, he passed the baton, or in this case, bat, to Ted Williams. Asked whom he considered the greatest of present-day hitters, Joe replied: “Ted Williams. He is by far the greatest natural hitter I ever saw.”

It was one of the gracious moments in the life-long competition between the two men. During their game playing days, to take a picture of both men together in their uniforms, it had to happen on neutral ground behind the backstop. Neither would go to the other’s dugout.
Decades later, both men are considered the two greatest players of their time.
User Agreement
Cancel
Continue