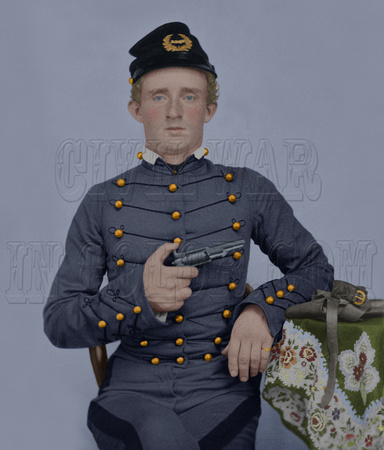 "Custer was always in trouble with the authorities. He had more fun, gave his friends more anxiety, walked more tours of extra guard, and came nearer to being dismissed more often than any other cadet I have ever known." fellow Cadet Peter Michie

Growing up, George Armstrong Custer's father, Emanuel, would play pranks on his family. In turn, his son's pranks would become part of West Point's lore. They were wide and varied:
Custer tried escaping drill practice by covering his ankle with iodine and limping around. To avoid demerits for long hair, Custer tried shaving his head. His classmates would shout out during inspection, "Hair out of uniform!"

Once during Spanish class, Custer asked the instructor to translate the phrase, "class dismissed". When the phrase was spoken in Spanish, Custer led a mass exodus from the room.

This image shows George Custer as a cadet at West Point. Custer entered West Point in July of 1857, with a planned graduation of 1862. Due to the onset of the Civil War, curriculum was compressed. Graduation was hastened to June 6, 1861, just one month after the original class of 1861 graduated.

During his stay, Custer earned 192 demerits; half coming in the last six months. Graduating last in his class, at any other time, would have been a poor start to a military career. Due to the urgent need for officers & his bold and aggressive style, two years & 22 days after graduating, Custer was promoted to Brigadier General.

This image is available with and without the image of the brass frame that holds the original.
© History In Full Color
User Agreement
Cancel
Continue