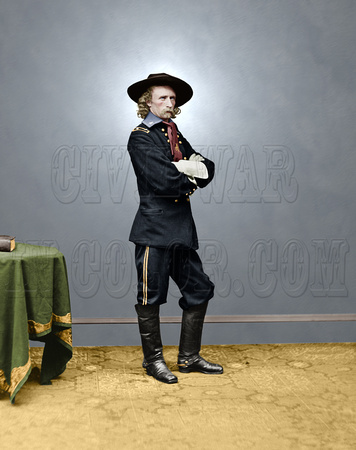 Both Custer and his commanding officer, Major General Sheridan, were present at the surrender at Appomattox. Not only did Sheridan appreciated Custer, he was also the type of man who liked to be prepared. He would carry a hidden $20 goldpiece to be used on the chance he was captured, to obtain his release from a rebel guard.

Sheridan used this goldpiece to purchase the pine table used to sign the surrender from the owner of the house, Wilmer McLean. After writing a letter to Mrs. Elizabeth Custer, he immediately presented both the letter and "Surrender Table" to Custer. The letter read:

I respectfully present to you the small writing table on which the conditions for the surrender of the Confederate Army of Northern Virginia were written by Lt. Gen Grant - and permit me to say, Madam that there is scarcely an individual in our service who has contributed more to bring about this desirable result than your very gallant husband.

Libbie Custer treasured the gift of the historic table which is now in the Smithsonian. It should be noted that this image does not include the "Surrender Table".
Restoration and colorization copyright 2014 by HistoryInFullColor.com
User Agreement
Cancel
Continue