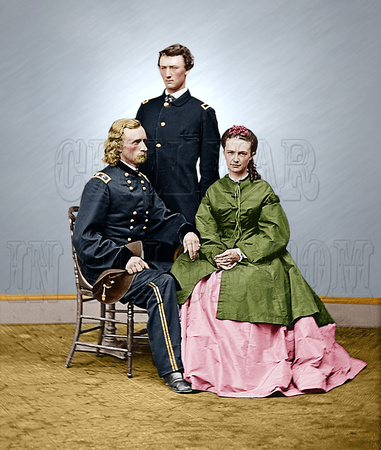 "If anyone thinks it is a soft thing to be a commanding officer's brother, he misses his guess." LT Tom Custer

In November of 1864, Libbie Custer joined her husband at Long Meadow, a mansion near Winchester, Virginia, where US GEN Sheridan had his headquarters. Soon Custer's younger brother, Tom, moved in with them. Thomas Custer is the first person in history to be awarded the Medal of Honor twice and the only double recipient during the War.

Tom had joined the army in September of 1861 at 16 years of age as a private. He had fought in Shiloh, Stones River, Chickamauga, Missionary Ridge, Chattanooga and the Atlanta Campaign. Tom had been promoted to corporal but felt to achieve glory like his brother, the cavalry was the place to be.

On October 23, 1864 Tom received a commission as a 2nd Lieutenant. GEN Sheridan arranged for Tom to be assigned to his older brother's staff.

Libbie wrote that at home, "We could not help spoiling him owing to his charm and our deep affection." Tom would complain that on duty, Armstrong yelled at him for "every little darn thing, just because I happened to be his brother."

After becoming an officer, like his brother, he quickly began to be promoted. Despite being only 20 years old and without the background of West Point, by the end of the war Tom reached the rank of Lieutenant Colonel.

What truly distinguished Tom from George and indeed all other soldiers was what happened on April 3rd and April 6th, 1865. On the 3rd, Tom was involved in a battle at Namozine Church. During the engagement Tom’s horse was shot from under him as he led the Second Brigade. He continued to fight, capturing the Confederate flag along with a dozen prisoners including several officers.

Three days later at the battle of Sayler’s Creek, Tom was leading another group of men to clear the enemy. Previous attempts had failed but Tom charged into battle. Having broken through the first line Tom raced to a second line of defense. As he went to capture another enemy flag, Tom was shot in the face. Managing to stay on his horse, he shot dead the color bearer and grabbed the flag.

Following the war Tom remained in the Army. George and Tom were joined by their brother, Boston, who became a civilian guide. All three brothers, along with a nephew were killed June 25th 1876 at the Battle of Little Big Horn, Montana.
© History In Full Color
User Agreement
Cancel
Continue