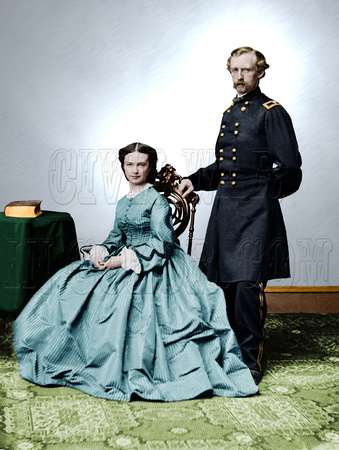 It was the day that would change George Armstrong Custer's life in both positive and negative ways. It happened during October of 1861. Custer was visiting his life-long confidant and sister, Ann Reed, in Monroe, Michigan. Monroe treated young officers as heroes unless proven otherwise. Custer proved otherwise.

One night, Custer and a male companion got drunk and caroused thorough town like common drunks, shaming himself & his family.

His appalled sister, Bible in hand, marched Custer into her bedroom and gave him the abstinence lecture that changed his life. Custer ended up promising before God to never touch another drop of intoxicating beverage as long as he lived. From that day forth, Custer never again touched alcohol, not even wine at formal dinner parties.

Neither father or daughter considered Custer marriage material based on that incident alone. Further, unlike the Reed or Custer families, the Bacons were part of the aristocratic class of Monroe making the match unsuitable.

However, Custer fell for Elizabeth at their first formal meeting and was persistent in wooing her. Although she rebuffed his first efforts, Custer was able to charm Libbie into falling in love with him. But not her father.

Despite Custer's promotion to Brigadier General, the judge continued to oppose the relationship. It was not until Custer gained fame for personal bravery that the Judge finally relented. On February 9, 1864, Custer and Elizabeth Clift Bacon finally married.

After his death in 1876, Elizabeth fought to prevent him from becoming a scapegoat for the Battle of Little Big Horn. She wrote books and gave lecture tours that praised her husband. Elizabeth survived another 57 years before passing away four days before her 91st birthday in 1933.
© History In Full Color
User Agreement
Cancel
Continue