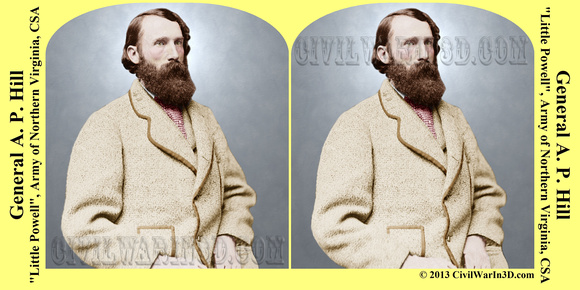 Ambrose Powell Hill, Jr. was a 35 years old career army officer at the start of the Civil War. Entering West Point in 1842 he became friends with other future generals such as McClellan, “Stonewall” Jackson and Pickett. Following his graduation in 1847 he served first in the Cavalry and then as surveyor. During that time he became engaged to Ellen Marcy, when the engagement failed she married George McClellan.


When Virginia seceded from the Union, he resigned his commission as a 1st Lieutenant and accepted one as a Colonel in the Confederate army. In February of the following year he was promoted to Brigadier General and to Major General in May of 1862. It is said that during the Peninsula Campaign that he fought with great ferocity whenever his men went against McClellan. Perhaps this was due to losing Ellen to McClellan years earlier.


During Antietam he was pivotal in keeping Lee from being crushed by counterattacking General Burnside. A few months later however at Fredericksburg, things were different. Hill allowed a gap of 600 yards in his line and was absent during the battle to the point that a rumor spread that he had been captured. Hill was transferred to Stonewall Jackson’s Second Corps and Jackson had Hill arrested for eight counts of dereliction of duty. Hill requested that Robert E. Lee setup a court of inquiry to investigate, but Lee, not wanting to lose either man refused. The feud between Hill and Jackson reached its end when it was members of Hill’s 18th NC Infantry that fired the shots that wounded Jackson in May of 1863, eventually leading to his death.


Following Jackson’s death, Hill was promoted to Lieutenant General and given command of Third Corps. Little more than a month later at Gettysburg Hill’s command suffered the highest casualties of Lee’s forces prompting the retreat back to Virginia. Hill was again criticized for his leadership during Gettysburg and again the following year during the Overland Campaign.


Illness was blamed for much of his troubles during Gettysburg, the Wilderness and at Spotsylvania Court House. Over the winter of 1864-65 he again fell ill and he was unable to command his forces for much of March 1865. He returned to command on April 1st 1865 and the following day when Petersburg fell to Union forces Hill was killed by Corporal John W. Mauck of the 138th Pennsylvania. During the chaos of the moment Hill was buried nearby and later reinterred in Richmond in 1867. A monument was dedicated to his honor in 1892.