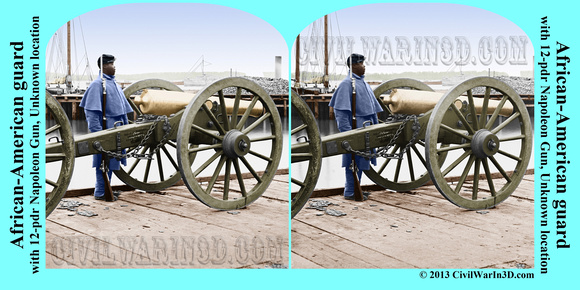 The "Napoleon" 12 Pounder was essentially obsolete by the time of the Civil War, but still played a vital role. Named for Napoleon III of France it was a safe, reliable and effective weapon, especially at close range. Mad of bronze and weighing in at more than 1,200 pounds it could fire a 12 pound projectile 1,600 yards. Since it was a smoothbore (did not have rifling on the interior of the barrel) it was quick and easy to load, but lacked accuracy at any great range.


In addition its weight required additional horses and men to maneuver. It’s chief rival on the field was the 3 inch Ordnance Rifle which came in more than 400 pounds lighter than the Napoleon and could accurately fire a 9 ½ pound projectile over 1,800 yards. With rifled guns being difficult to use at short range and the Napoleon less accurate at longer range the solution was to combine the two types of weapons and allow them each to be used at their most effective range.


This way the Ordnance Rifle was used like a long range target rifle and the Napoleon in close combat where accuracy was less of an issue. The South, with limited capacity to manufacture more accurate rifled guns relied on the Napoleon as the mainstay of their arsenal for the entire war.
© History In Full Color
User Agreement
Cancel
Continue