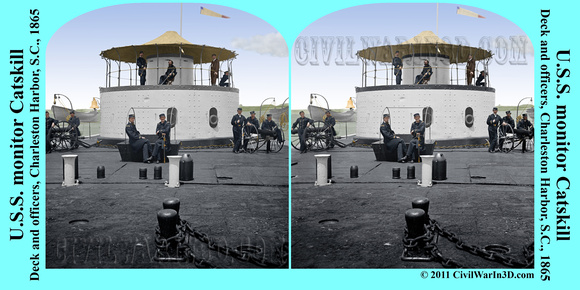 The old seaman's expression, "Shiver my timbers! would have to be changed to "Unrivet my bolts!", British magazine Punch, after Monitor vs Merrimac Battle

After the March, 1862, Battle of Hampton Roads, both sides were eager to add ironclads to their naval fleet. US Sec of the Navy, Gideon Welles, received $13 million from Congress to order 56 monitor class ironclads. Monitor inventor, John Ericsson tweaked his design by placing the anchor well of the USS Catskill inside the ironclad's overhanging bow. Thereby, protecting the crew from enemy fire as the anchor was lowered or raised by a windlass.

She first reported for duty in February of 1863, as part of the South Atlantic Blockading Squadron. During the August 17, 1863, Second Battle of Charleston Harbor, a shell fired from Ft. Sumter hit the pilothouse, loosening a piece of iron that flew through the cabin killing Commander Rodgers and the assistant paymaster.

Following the war, she returned to the Philadelphia Naval Yard and was decommissioned in July of 1865. During this time many of the Civil War era ships were placed in reserve for the possibility of future service. In 1873, she was called back to service and was commissioned in 1875 but was again put in storage in 1877. With the outbreak of the Spanish-American war in 1898, she was once again brought back for service. This last commission lasted only from April to September of 1898, when she was once again put in storage. Finally, in December of 1901, she was sold for scrap and stricken from the Navy records.
© History In Full Color
User Agreement
Cancel
Continue