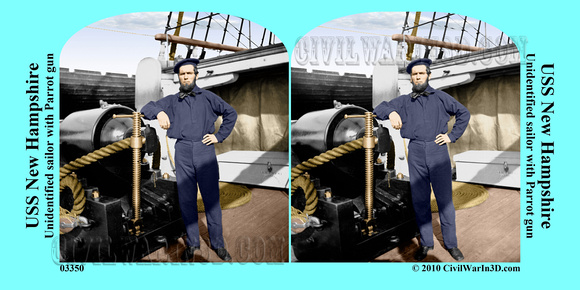 The USS New Hampshire began life as the USS Alabama when she was commissioned in 1816. Work was started in 1819, finished in 1825. She was 36 years old at the start of the war. However, unlike many of the other ships of the time, she had not seen service. Once work was complete she was placed on stocks in anticipation of being needed for another event like the War Of 1812. Designed as a 74 gun ship of the line, she would have been a formidable adversary at that time.


By the Civil War, she had been forgotten and aging. In 1863, the need for more ships to participate in the blockade of the South Atlantic, allowed her to at last be commissioned. She was renamed New Hampshire, since Alabama was now part of the Confederacy and was finally commissioned in April of 1864. Now an aging sail ship in the time of Monitor and other ironclads she was fitted out as a supply ship and spent the duration of the war in Port Royal, South Carolina.


Following the war she continued to serve as the flagship for the “Apprentice Training Squadron” and was used to train new sailors. She was decommissioned in 1892 and was loaned to the New York Naval Militia the next year. In 1904 she received her 3rd name (“Granite State”) to allow the name New Hampshire to be used for an upcoming battleship. She continued as a training ship in New York through the First World War and became the first ship for many future seamen during the war.


In 1921, while still serving as a training ship, she caught fire and sank at a pier on the Hudson River. Sold for salvage, she was refloated in 1922 and was being towed to the Bay of Fundy when the towline broke during a storm and she again caught fire and sank again. Today the wreck lies in 30 feet of water and can easily be visited by scuba divers, although most of the remaining hull lies buried in sand.
© History In Full Color
User Agreement
Cancel
Continue