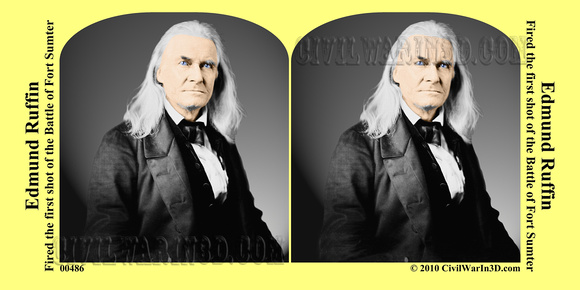 Edmund Ruffin, at age 67, was a Virginia farmer and author when the war started. Most of his early life had been devoted to theory of crop rotation and editing the “Farmers Register”. At the same time, he was fiercely opposed to the abolitionists and even proposed secession years before the start of the war. He attended John Brown’s execution in 1859 and even purchased a number of the pikes that Brown had planned to use to arm slaves that joined him. These pikes were then sent to each governor of slave holding states to remind them about the treachery of the North.


The following year he wrote his book, “Anticipations Of The Future, To Serve As Lessons For The Present Time” which predicted the start of the Civil War in 1868 after Seward won re-election. The resulting war would end with victory for the South. The one thing he did get right was Fort Sumter as the starting point.


During the following year when South Carolina became the first state to secede, he became angry with Virginia and decided to leave. Arriving in South Carolina, he was given the honor of firing the first shot on Fort Sumter. He was also the first to enter the fort when it surrendered. During much of the war he put his farming skills to use, teaching Southern farmers how to rotate crops and extend their yields.


After the surrender of Lee, he lost his motivation and wrote in his diary:

“I here declare my unmitigated hatred to Yankee rule—to all political, social and business connection with the Yankees and to the Yankee race. Would that I could impress these sentiments, in their full force, on every living Southerner and bequeath them to every one yet to be born! May such sentiments be held universally in the outraged and down-trodden South, though in silence and stillness, until the now far-distant day shall arrive for just retribution for Yankee usurpation, oppression and atrocious outrages, and for deliverance and vengeance for the now ruined, subjugated and enslaved Southern States!
...And now with my latest writing and utterance, and with what will be near my latest breath, I here repeat and would willingly proclaim my unmitigated hatred to Yankee rule--to all political, social and business connections with Yankees, and the perfidious, malignant and vile Yankee race.”


On June 17th, 1865 at the age of 71 he wrapped himself in a Confederate flag and committed suicide with a gunshot to the head. His stated in his suicide note that he would, “rather be dead than live in a country subjugated by the Yankee race.”