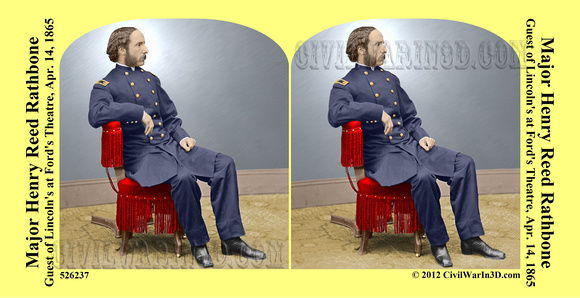 Major Rathbone was the last surviving witness, that was seated in the President’s Box at Ford’s Theatre, during the Lincoln Assassination. His story is also one of the most tragic. Early on, the outlook for his life seemed much brighter. His father was a businessman and later mayor of Albany, New York. When he died, he left Henry with an estate of $200,000. Rathbone worked in a law partnership before joining the NY 12th Infantry as a Captain at the start of the War. He served at Antietam and Fredericksburg. By the end of the War he was a Major and planning his return to law practice.


After his father's death, his mother remarried Ira Harris. Harris was the U.S. Senator that replaced William Seward when he became Secretary of State. His new step-father had a daughter, Clara, from a previous marriage. Soon Henry and Clara became inseparable. His step-father, Senator Harris, became good friends with Lincoln, as well as William Seward. After other invitees, including General Grant, declined the Lincolns' invitation to attend the theatre, Lincoln invited Senator Harris’s daughter and her fiancé to attend. By this quark of fate, both would witness the assassination.


When Booth fired the shot that killed Lincoln, Rathbone struggled with him. Booth brandished a large dagger and stabbed Rathbone before leaping to the stage. After recovering, Rathbone left the Army and returned to private practice. In 1867, he and Clara married and eventually had three children.


In 1882, Rathbone was appointed U.S. consul to Hanover, Germany. The entire family followed him to Europe. At this point, his mental state rapidly deteriorated. Some speculate that he was never able to fully accept that there was nothing he could have done to prevent Lincoln’s assassination. Two days before Christmas in 1883, he killed Clara and attempted suicide. All of the children managed to escape and survived unharmed. Rathbone was found by police bleeding and claiming that people were hiding in the walls behind the pictures.


Found guilty and insane, he lived the rest of his life in an asylum for the criminally insane. When he died at the age of 74 in 1911, he was buried next to Clara in a cemetery in Hanover. In 1952, the managers of the cemetery determined that there had been no activity or interest from the family and disposed of both bodies.