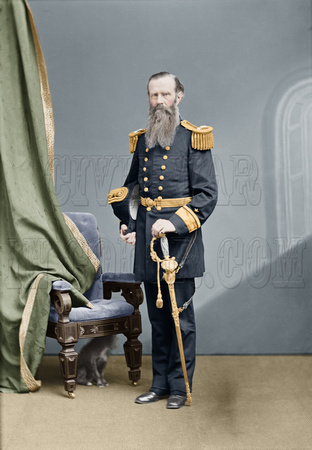 "These few lines is from your Crew of the Monitor with there Kindest Love to you(,) there Honered Captain(,) Hoping to God that they will have the pleasure of Welcoming you back to us again Soon... Since you left us we have had no pleasure on Board the Monitor... We remain untill Death your Affectionate Crew, The Monitor Boys"


Lt. John Worden, commanding the USS Monitor, fought his way into history during the Battle of Hampton Roads also known as the Battle of the Ironclads. Along with the design of Monitor, the ironclad's victory can be attributed to Worden's "knack of winning his men's affection, as well as their respect."


During the battle, Worden was the only casualty on the USS Monitor. He was looking through the viewing slot in the pilothouse when the CSS Virginia shot a shell at the pilothouse. The solid iron beam that protected the pilothouse, measuring a foot by nine inches, was broken nearly in two by the sixty-eight pound riffle shell. Worden, blinded, ordered the quartermaster to sheer off from the battle. He was taken to his cabin where Surgeon Daniel C. Logue plucked slivers of iron and paint from his eyes.


The fight ended because the CSS Virginia, believing that the USS Monitor was leaving the battle, steamed away. That afternoon, Worden was removed from the Monitor as his crew cheered him wildly.


Worden had only been on the Monitor for less than a month. His successor, Lt. Jeffers was disliked by the crew. The hope for his return, may have inspired the crew to write Worden a "Get Well Soon" letter.


After his recovery, Worden went on to command the ironclad USS Montauk during the Battle of Fort McAllister and was able to destroy the Confederate privateer Rattlesnake. After the war Worden served as Superintendent of the U.S. Naval Academy and ended his career as Rear Admiral.


The battle turned Worden into a national hero. Lincoln visited Worden as he was recuperating his sight in Washington. In this image, Worden can be seen wearing the sword his home state of New York, awarded him. Tiffany & Co. was commissioned to create the ornate, finely crafted 37-inch sword, inlaid with gold and silver. Its handle was emblazoned with the Roman God of the Sea, Neptune. And with it came a gold-plated sheath and gold-embroidered belt. All together, the set cost some $550, a hefty sum in those days.


The family donated the sword to the Naval Academy museum in 1921. In 1931, the sword was stolen. It was recovered in 1998 as part of an FBI investigation of several appraisers on the PBS series Antiques Roadshow. The sword currently is on display at the Naval Academy.
© History In Full Color
User Agreement
Cancel
Continue