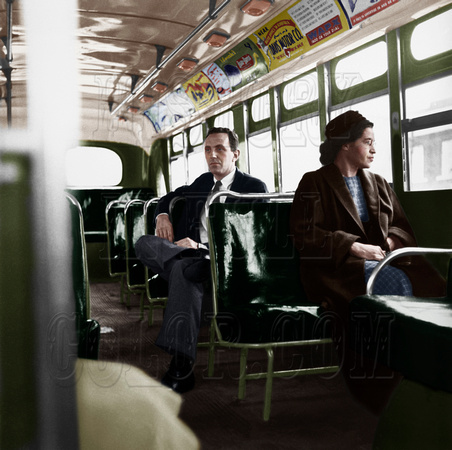 “I had been pushed around all my life and felt at this moment that I couldn’t take it anymore,” Rosa Parks

On December 1, 1955, Rosa Parks was arrested for refusing to give up her seat on a bus to a white man. After 381 days, the Montgomery bus boycott ended with the United States Supreme Court ruling that Montgomery's segregated bus system was illegal.

This photo was taken on December 21, 1956, the day after the Supreme Court's ruling was recorded in the Montgomery, Alabama district court. Parks told Douglas Brinkley, "she had left her home at the Cleveland Courts housing project specifically for a picture on a bus, and that the idea was for her to be seated in the front of the bus with a white man behind. Similar photo opportunities were arranged for the Rev. Dr. Martin Luther King Jr. and others during the day."

According to Brinkley, Parks "was reluctant to take part in the picture, but both the journalists and members of the civil rights community wanted an image that would dramatize what had occurred."

An United Press International (UPI) reporter and two photographers from Look magazine had arranged for the picture. The reporter was Nicholas C. Chriss who is seen sitting behind Parks.

According to Chriss, "Each anniversary of that day, this photograph is brought out of musty files and used in various publications around the world. But to this day no one has ever made clear that it was a reporter, I, covering this event and sitting behind Mrs. Parks, not some sullen white segregationist! It was a great scoop for me, but Mrs. Parks had little to say. She seemed to want to savor the event alone."
© History In Full Color
User Agreement
Cancel
Continue