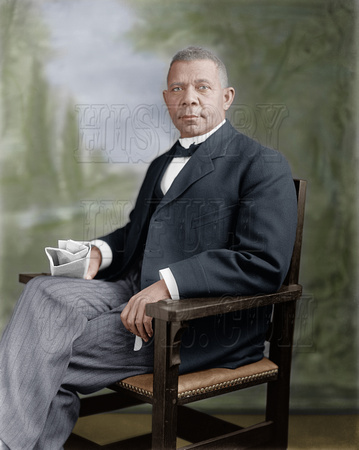 “Don’t you forget that that man, unlike you, bears the mark of the lash on his back.” W.E.B. Du Bois

Booker T. Washington was born a slave on a small Virginia farm, in April of 1856. His life work of educating African-Americans would not have been possible without the North winning the Civil War. As part of his efforts to raise funds for black schools, Washington became the most famous black man in America between 1895 and 1915. He consulted with Presidents, received an honorary degree from Harvard and even had tea with Queen Victoria at Windsor Castle.

Washington's journey to educate others began in 1881when he was selected to start a school to educate African-Americans in Tuskegee, Alabama. As he toured the area to advertise the new school, Washington realized that the local African-Americans still lived as they had under slavery. A family of four would share one fork. Bathing even the face and hands happened outside of the home. It did not occur to anyone to grow food along with cotton ...

Washington determined that the school would have to teach more than "book-learning". The future Tuskegee University would give the students an all encompassing education focusing on practical skills needed in an agriculture state, as well as intellectual, moral and religious instruction.

As with any University today, fund raising is a big part of a Dean's job. In his efforts to raise funds for the school, Washington would give speeches, emphasizing the importance of getting an education. He would tell stories of former slaves donating what little they had to fund the school. How after the war, "It was a whole race trying to go to school. Few were too young and none were too old to make the attempt to learn", said Washington.

Washington was also pragmatic. He kept assuring whites that his school would not challenge white supremacy or result in economic competition with whites.

"The opportunity to earn a dollar in a factory just now is worth infinitely more than to spend a dollar in an opera house," declared Washington.


Among Washington's white critics was Thomas Dixon, author of "The Clansman". He complained that Washington is teaching his students, “to be masters of men, to be independent, to own and operate their own industries,” and “in every shape and form destroy the last vestige of dependence on the white man for anything.”

In his own lifetime, Washington's political philosophy of accepting inequality for education was controversial with African-Americans. Although Washington accepted segregation, that does not mean he believed in it. In 1909, he turned down an invitation to the founding conference of the N.A.A.C.P. writing, “There is a work to be done which no one placed in my position can do.”

Whereas, Washington's political philosophy is not considered acceptable today, the Tuskegee Institute grew from classes taught in a broken-down shack to 66 buildings on 2300 acres of land under his guidance.
© History In Full Color
User Agreement
Cancel
Continue