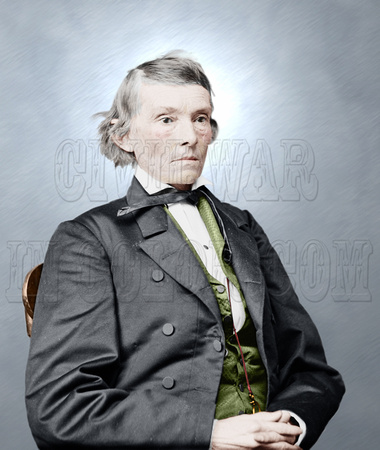 
Alexander Stephens was an odd looking man. He was 5' 7" and weighed about hundred pounds. He suffered from chronic ill health, resembling "a boyish invalid escaped from some hospital."


However, Stephens was surprisingly resilient. Despite his frailty, Stephens used his cane to fight off a knife attack and challenged three men to a dual.


Stephens's gift of gab backfired during his inauguration as Confederate Vice President. What became known as the "Cornerstone Speech", Stephens defined the Confederate culture as based on slavery - alienating possible support in Europe, the North and infuriating abolitionists.


Since 1843, Stephens had served as Georgia's Congressman. He was for states' rights, a benevolent slave owner, against secession and wanted to be a peacemaker. He was elected Confederate Vice President to appease the moderates. War Hawk Jefferson Davis's solution to having a Dove Vice President was to ignore him.


Consequently, Stephens was surprised to be selected as a Hampton Roads Peace Commissioner. His health made it necessary to bring his valet with him on the trip.


On arrival at the Union lines, Stephens heard someone ask, "Which is Stephens? Which is the Vice President?


"That one, leaning on the arm of the blackman."