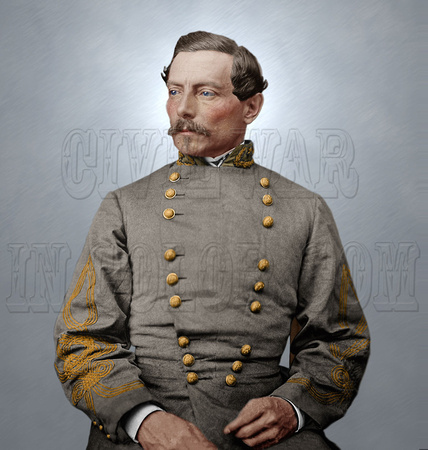 While today remembered as the first Confederate General, the taking of Fort Sumter in 1861 and for his role in many battles including First Manassas (First Bull Run) few remember Beauregard's role in creating the Confederate Battle Flag. The first Confederate flag was known as the “First National Flag” and popularly referred to as the “Stars and Bars”. This flag was similar to the U.S. flag. Instead of thirteen red and white stripes, it had only three - two red stripes with white in the middle. The blue area had stars in a circle almost identical to the classic “Betsy Ross” design. Since stars were added as states joined the Confederacy, it too eventually had thirteen stars, much as the original U.S. flag.


During First Manassas (First Bull Run) Beauregard noticed the flag problem. The official Confederate flag was too similar to the U.S. Flag. Seeing stars and stripes waving at a distance, it was not always obvious what the number of stripes or stars were. As the smoke from gunfire rose over the battle, field flags were an important way to determine who was friend of foe. By being able to quickly identify a flag, you could differentiate the location of forces during battle. For both sides the similar flag design caused confusion.


He wrote Joseph E. Johnston about his idea, "I wrote to [Miles] that we should have two flags—a peace or parade flag and a war flag to be used only on the field of battle—but congress having adjourned no action will be taken on the matter—How would it do us to address the War Dept. on the subject of Regimental or badge flags made of red with two blue bars crossing each other diagonally on which shall be introduced the stars, ... We would then on the field of battle know our friends from our Enemies."


Ultimately a variation of this design would replace the First National flag and even today remains as one of the most cherished (and hated) symbols of the South.
© History In Full Color
User Agreement
Cancel
Continue