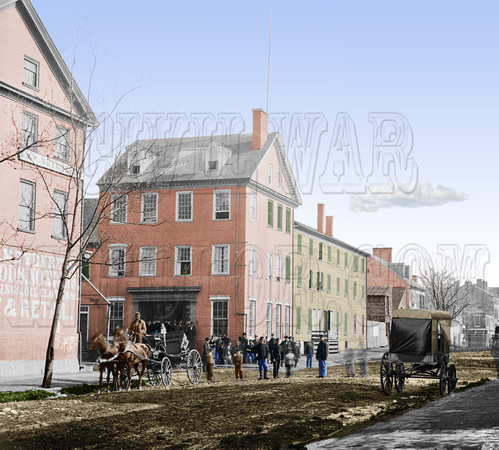 Alexandria, Virginia was one of the first Southern cities to fall under Union control after secession. Due to its proximity to Washington D. C., the city was immediately captured. This did not, however, sway the portion of the residents who were ardent secessionists. Secessionist James Jackson owned the Marshall House (a small hotel) which sat approximately two miles from the White House. To show his support for the Southern cause, he raised a Confederate flag above his hotel.


The flag and the mast were so large that they could be seen from the White House. Lincoln asked his friend Colonel Ellsworth, of the 11th New York Zouave’s, to have the flag removed. Ellsworth had read law in Lincoln's office in Springfield. He became so close to the Lincoln family that he accompanied them from Springfield to Washington, catching the measles from Willie and Tad during the trip to the inauguration. Afterwards, he organized a group of New York firemen into the 11th New York Zouaves, which were known as the "Fire Zouves".


Ellsworth quickly took his regiment across the Potomac River and marched unopposed to the Marshall House. Jackson had sworn that the flag would only by removed “over his dead body”. When Ellsworth cut down the flag, Jackson confronted him on the stairway and killed him with a shotgun. Two more shots rang out almost immediately, Jackson firing from the other barrel and missing and Corporal Brownell, of Ellsworth unit firing and killing Jackson.


Both Ellsworth and Jackson became Martyrs for their cause. Lincoln had Ellsworth's body returned to the White House, where he lay in state in the East Room prior to his burial in New York. To her horror, the Confederate flag, stained with Ellsworth's blood, was given to Mary Lincoln. For his part, Brownell, was eventually awarded the Congressional Medal of Honor.


The Marshall House became a tourist location with many artifacts removed as souvenirs. Torn down in the 1950’s, some of the original artifacts were preserved and are now on display at the Alexandria Archaeology Museum. Today, hotel Monaco sits on the site of the Marshall House. A plaque on the corner remembers Jackson as a Martyr, defending his property . The plaque doesn't mention the killing of Colonel Ellsworth.
© History In Full Color
User Agreement
Cancel
Continue