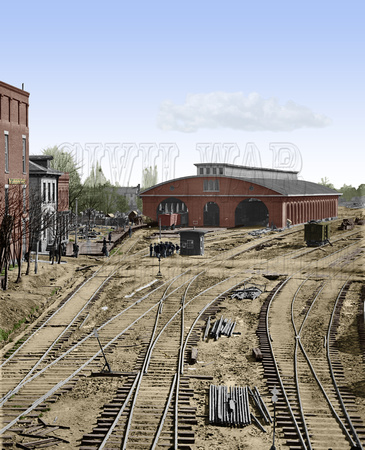 This image was taken the day before it was destroyed by US Gen Sherman's Troops. At the start of the war, Atlanta had a population just below 10,000 and was a fairly small city in the U.S.. Atlanta’s importance quickly became apparent after the war began. She was far enough south to be safe from invading armies. Having several railroads serving the area, Atlanta was able to become a major manufacturing and distribution center for the Confederacy.


The population quickly more than doubled and Atlanta became a boomtown. By 1864, Atlanta had transformed from a small city to a large industrial base and the target of the Union army. With the “Fall of Atlanta” in September of 1864, Sherman moved in and prepared for its destruction. To keep the rail yards and track from falling back into Confederate hands, Sherman had the railroad destroyed. Afterwards, he burned the city to keep it from returning to manufacturing for the South. Today, Atlanta continues to be a major hub in the South and the largest city in Georgia.
© History In Full Color
User Agreement
Cancel
Continue