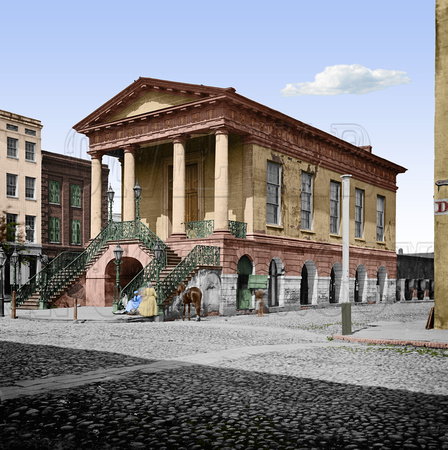 The use of this area as a market has continued in Charleston since 1788 when Charles Pinckney ceded the land to the city with the stipulation that it be used as a public market. The building known as the “Market House” was built in 1841 in a Greek revival style and was based on the Temple of Wingless Victory in Athens.


With the outbreak of the war many Southerners made their way to Charleston to volunteer and found themselves at the Market House. This became the point of induction for many Southerners and remained a sentimental favorite for veterans after the war. With the creation of the Confederate Museum after the war, many veterans returned to Charleston and donated numerous items. Today the museum is run by the Daughters of the Confederacy and operates in the second floor of the building. The public market remains, as Charles Pinckney requested, in the lower area beneath the museum and in the stalls that run for several blocks behind it.
© History In Full Color
User Agreement
Cancel
Continue