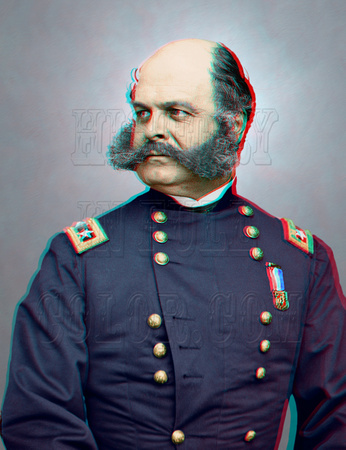 
Like many of the senior generals during the Civil War, Burnside had a previous military career, resigned, failed in civilian life and returned to the military and achieved recognition.

Graduating West Point in 1847 he arrived too late for any battles during the Mexican-American War. Assigned duty in the west he travelled in California, Arizona, New Mexico and Nevada, where he received a wound in the neck by an arrow.

Resigning his commission in 1853 (but staying in the Rhode Island militia) he opened Burnside Arms Company, selling the Burnside Carbine. Through shady dealings by his business partners he lost a $100,000 contract.

After losing a congressional race in 1858 and the destruction of his business by fire, he was forced to sell his patents and was ruined financially. With few prospects he accepted a job as treasurer of the Illinois Central Railroad, headed by George McClellan.


At the start of the war he raised a regiment and was quickly made a Brigadier General in the militia and soon was reinstated in the volunteer army, first as a Colonel and within three months to General. The following summer he was promoted to Major General. With McClellan's failure he was offered command of Army of the Potomac, but refused it; perhaps out of loyalty to McClellan, perhaps as an admission to his inexperience. Within six months McClellan had returned to command and again was relieved. This time when the appointment was offered, he accepted in November 1862.


A poorly planned campaign that resulted in a loss a few weeks later at Fredericksburg started the beginning of the end. By January 1863 his command was literally bogged down in mud and several officers openly challenged him. He threatened to resign if they were not court-martialed. Lincoln, siding with the officers, accepted the resignation and appointed General Hooker (who had conspired against Burnside) to replace him.


He remained on active duty and participated in a number of campaigns until he was held responsible for an ill-fated attack at Petersburg and was relieved of command by Grant. Within a year of the end of the war he ran for Governor of Rhode Island and was elected in May of 1866 to the first of three terms (one year each). In 1871 he was named as the first president of the National Rifle Association, and in 1874 was elected to the Senate, where he served till his death in 1881.
© History In Full Color
User Agreement
Cancel
Continue