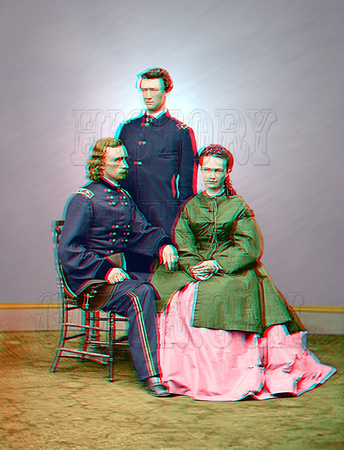 
When we think of the Custers, we almost always think of General George Custer and of his wife Libbie. General Custer was a true hero during the Civil War. His exploits and death in the west remind of his arrogance. What are often overlooked are the other members of the Custer family.


George Armstrong Custer was the oldest of several children that included his brothers, Thomas (shown) and Boston. At the start of the Civil War Thomas was just 16 and enlisted as a private in the 21st Ohio Infantry. Overshadowed by the fame and notoriety of George, he fought in some of the Western campaigns in Tennessee and then Atlanta. He was mustered out as a Corporal in 1864. Thomas was immediately commissioned as a Second Lieutenant in the 6th Michigan Cavalry. He became an aide-de-camp to his brother and remained with him through the rest of the war.


After becoming an officer, like his brother, he quickly began to be promoted. Despite being only 20 years old and without the background of West Point, by the end of the war Thomas reached the rank of Lieutenant Colonel.


What truly distinguished Thomas from George and indeed all other soldiers was what happened on April 3rd and April 6th, 1865. On the 3rd he was involved in a battle at Namozine Church. During the engagement Tom’s horse was shot from under him as he led the Second Brigade. He continued to fight, capturing the Confederate flag along with a dozen prisoners including several officers. Three days later at the battle of Sayler’s Creek, he was leading another group of men to clear the enemy. Previous attempts had failed but Tom charged into battle. Having broken through the first line he raced to a second line of defense. As he went to capture another enemy flag, he was shot in the face. Managing to stay on his horse, he grasped the flag. His own pistol fired, wounding him in the chest near his heart. He managed to return, with the flag, to the Union lines.


For each of his actions he was awarded the Medal of Honor. Thomas is the first person in history to receive such an honor twice. Following the war he remained in the Army. George and Tom were joined by Boston who became a civilian guide. All three brothers, along with a nephew were killed June 25th 1876 at Little Big Horn.
© History In Full Color
User Agreement
Cancel
Continue