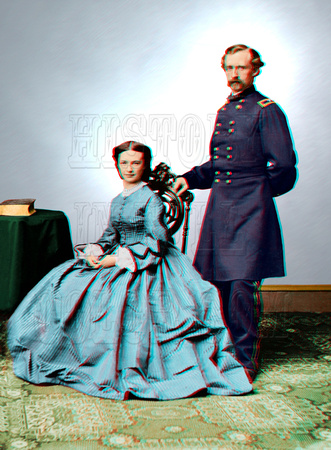 
George Custer first saw his future wife, Libbie, when he was ten years old and she was only seven. He was not introduced to her socially until 1862 when he was 22 while home on leave.

At first it was not considered a good match. Neither she, nor her father (Judge Daniel Bacon) were impressed. After winning Libbie over, the judge disapproved of the match because Custer's father was a blacksmith. Even after promotion to Brigadier General, the judge continued to oppose the relationship. It was not until Custer gained fame for personal bravery that the judge finally relented.

On February 9, 1864 Custer and Elizabeth Clift Bacon finally married. After his death in 1876, she survived another 57 years and passed away in 1933.
© History In Full Color
User Agreement
Cancel
Continue