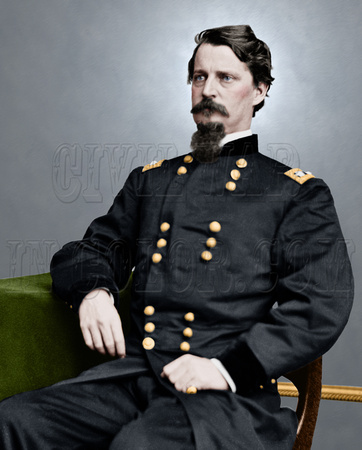 “Hancock was superb today", General McClellan, in a telegraph sent to Washington during the Peninsula Campaign in 1862. From that point “Hancock the Superb” was born. Sadly, while Hancock may have been superb, McClellan did not take advantage of the opportunity that Hancock had given him and lost an opportunity to have a major victory early in the war.


As the Commander of II Corps, Hancock's men became known as "Hancock's Cavalry"; they stopped marching only while the staff officers got fresh horses.

At Gettysburg, on July 3rd, Hancock was on the receiving end of Pickett’s Charge. Hancock rode his horse along the line to ensure that his men knew he was there and provide moral support. When one of his officers tried to persuade him to move to the rear Hancock replied "There are times when a corps commander's life does not count." Shortly after he was wounded when a round struck his saddle and pierced his thigh. For his gallantry and bravery he was awarded the “Thanks of Congress”. While he continued to command troops, the effect of this wound affected him the rest of the war.
© History In Full Color
User Agreement
Cancel
Continue