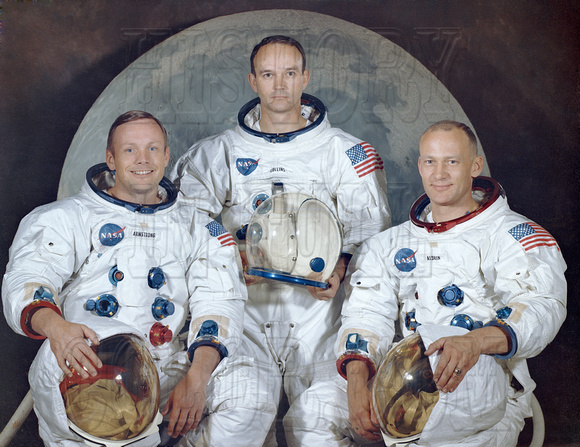 This is the official crew portrait of the Apollo 11 astronauts.

Pictured from left to right are: Neil A. Armstrong, Commander; Michael Collins, Module Pilot; Edwin E. "Buzz" Aldrin, Lunar Module Pilot.
Apollo 11 was the first manned lunar landing mission that placed the first humans on the surface of the moon and returned them back to Earth.

Astronaut Armstrong became the first man on the lunar surface, and astronaut Aldrin became the second. Astronaut Collins piloted the Command Module in a parking orbit around the Moon.

Launched aboard the Saturn V launch vehicle (SA-506), the three astronauts began their journey to the moon with liftoff from launch complex 39A at the Kennedy Space Center at 8:32 am CDT, July 16, 1969.
© History In Full Color
User Agreement
Cancel
Continue