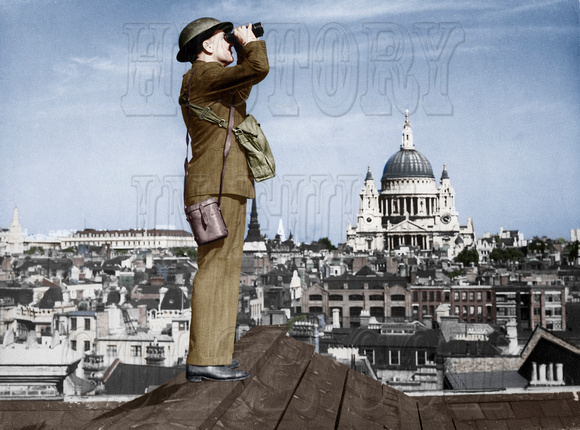 “Hitler knows that he will have to break us in this island or lose the war. If we can stand up to him all Europe may be free, and the life of the world may move forward into broad, sunlit uplands; but if we fail, then the whole world will sink into the abyss of a new Dark Age.” Winston Churchill

In the summer of 1940, Britain refused to publicly condone Hitler’s intention to rule a Nazified Europe. Consequently, Germany decided to attack the island nation. Instead of fighting Britain’s powerful navy, airplanes would drop bombs targeting military infrastructure from the air.

Hitler was outraged. “We will stop the handiwork of those night air pirates, so help us God! The hour will come when one of us will break and it will not be National Socialist Germany!"

Starting on Saturday, September 7, 1940, and for 57 consecutive nights, during what became known as the “Blitz”, London was struck.

In an “all hands-on deck” situation, civilians, like the plane spotter, “did their bit”, to protect the nation.
© History In Full Color
User Agreement
Cancel
Continue