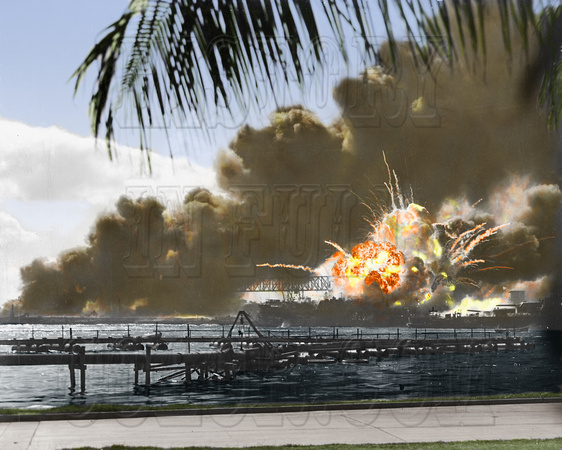 "They tell me I got one Nip pilot smack in the face, and his plane crashed". "Dutch", USS Shaw bosun's mate "

During the attack on Pearl Harbor, the USS Shaw, a Mahan-class destroyer, was in drydock for repairs. Hearing explosions, the USS Shaw's skeleton crew looked up, saw planes with the red rising sun on them and leaped to battle stations.

The crew firing back with the Shaw's machine guns, fought valiantly to save the ship. Her defenders couldn't, however, use the ship's 5-in guns against the low-flying Japanese planes. The repercussions would have knocked the destroyer off her blocks.

"Dutch" reported that the enemy planes were strafing the ship when they weren't dropping bombs. To make matters worse, the water cooling on the machine guns went haywire, the heat blistering the crewmen's hands.

Between 7:55 and 9:15 am, during the second wave of the attack, the Shaw was hit by three bombs which were released by steep-diving planes from an altitude of about 1000-ft. Apparently all three hits were made simultaneously. The ship may have been struck by two 550-pound general purpose bombs and a 16-in armor-piercing variety.

The first two bombs went through the forward machine gun platform and exploded in the crew's mess. The third smashed through the port wing of the bridge. Fire spurted from ruptured oil tanks and spread through the ship.

By 9:25, all the fire fighting facilities were exhausted, the explosions having cut off the water supply, and the order to abandon ship was given.

Shortly after 9:30, the forward magazines blew up. The force of this explosion was so great that one of the Shaw's 5-in shells traveled through the air nearly a half-mile across the bay to a seaplane ramp on Ford Island.

Lt. Brown personally went down to the dry dock headquarters, demanding that the dock be flooded so that the ship could float off its perch and fight.

As the dock submerged, flaming oil swirled around the stricken vessel. Her survivors swam through a gauntlet of patches of smoking oil to safety. Twenty-five Shawmen were killed in the attack.

Unlike the unfortunate USS Arizona, the Shaw survived the attack to fight another day. After massive repairs, she earned eleven battle stars while serving in the Pacific during World War II.