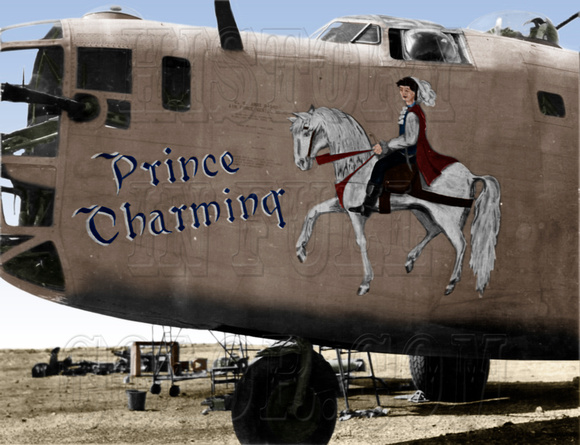 The golden age of "Nose Art" came during World War II. Reaching back to World War I, the Italians had been the first to embellish their planes with a personal paint scheme that identified the aircraft and its crew. During World War II, this had grown to an art form that showcased the artist's skill level which ranged from professional civilian artists to a guy the unit knew was good at drawing. The art itself ranged from a racy for the times image of a pinup to the whimsy that reflected the humor of both the artist and crew.

The 98th Bombardment Group chose the theme of Disney characters for their unit. Crew Chief Amos Everette Nicholson was tasked with painting the nose art on several of his squadron's bombers, including images of "Snow White & the Seven Dwarfs" and "Prince Charming".

"Prince Charming" was a Consolidated B-24 Liberator four engine American heavy bomber. The B-24 holds the record for the most produced U.S. military aircraft with more than 19,000 made for the war compared to less than 13,000 for the B-17. During World War II, the B-24 dropped a higher tonnage of bombs than any other Allied aircraft.

In an effort to deny oil to the Axis powers, on August 1, 1943, "Prince Charming" took part in "Operation Tidal Wave" to bomb nine oil refineries around Ploiesti, Romania. The "Prince Charming", flown by Thomas W Bennett, turned back early in the vicinity of Corfu and did not reach the target area.

Ploiesti produced as much as 30% of the oil for Germany and became a major target for the Allies. For “Operation Tidal Wave” the US used a combined force of 177 B-24s, of which 162 arrived over the target. Of those that reached the target 53 were completely destroyed and another 55 had been heavily damaged. This resulted in the loss of 440 air crew killed and another 220 captured or missing. The Germans on the other hand lost only 4 aircraft with 16 killed.

Less than half of the original 177 planes managed to return to Libya and of those more than 60% had damage. In September the Allies assessed the oil fields at Ploiesti and found "no curtailment of overall product output". While this was a strategic Allied failure, it did result in the awarding of five Medals of Honor, the most for any single air action in history.

One of the planes Nicholson painted didn't make it back. "Snow White & The Seven Dwarfs" was shot down over Bulgaria, while helping to defend "The Witch". The "D" series "Prince Charming", shown in this image, was retired from combat operations and was replaced in February 1944 by a "J" series "Prince Charming", which carried similar nose art. Rudolph "Rudy" Gaydosh was the Crew Chief on both "Prince Charming’s" and proudly claims that none of "his" ships was lost in combat. Nicholson survived the war. Shortly after publishing the book “Snow White Goes to War”, he passed away at the age of 95 in 2012.
© History In Full Color
User Agreement
Cancel
Continue