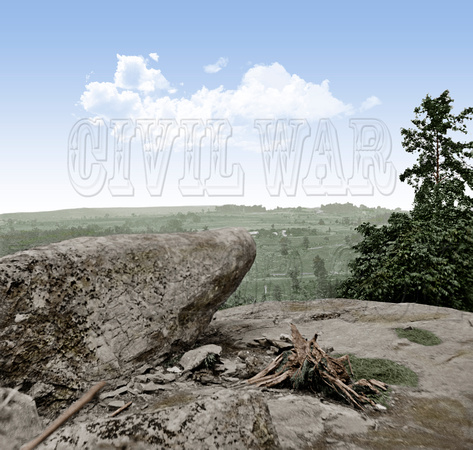 On July 2, 1863, about 3:00 p.m., U.S. Gen. Gouverneur Warren arrived at the summit of Little Round Top during the second day of the Battle of Gettysburg, Penn. From his vantage point, Warren realized that the high ground of Round Top & Little Round Top, “key of the whole [Union] position” was available for capture.

Based on a signalman’s observation, Warren asked Capt. James Smith’s battery at Devil’s Den to fire a shot into the woods between Plum Run and Emmittsburg road. “This shot, whistling over the heads of these men, caused them to make involuntary movements. The sunlight reflected from their glistening bayonets and gun barrels revealed a long line of infantry, far outflanking the left of [Gen. David] Birney's line and in position ready to advance.”

Near the George Weikert house on Cemetery Ridge, U.S. Col Strong Vincent, was waiting at the head of the 3rd brigade, 1st division. Noticing U.S. Gen George Sykes’ aide, Vincent rode forward asking, "Captain, what are your orders?" The captain replied, "Where is General [James] Barnes?" Vincent said, "What are your orders? Give me your orders" The captain answered, “General [George] Sykes told me to direct General Barnes to send one of his brigades to occupy that hill yonder,” pointing to Little Round Top. Vincent said, "I will take the responsibility of taking my brigade there."

Although a lawyer in civilian life, Vincent knew to position his men not on top of the summit but on the crest below. As the battle raged below at Devil’s Den, Vincent concluded the top priority was to defend the western and southern slopes. He selected a ledge, known afterwards as Vincent’s Spur, as the spot to place his men.

Shells began exploding on either side of Vincent and Pvt. Oliver Norton, who bore the brigade headquarters flag. “They are firing at the flag, go behind the rocks with it,” yelled Vincent. As the Confederates approached from the woods, Vincent gave instructions and encouragement as he positioned the 44th N.Y., 83rd Penn., 20th Maine and the 16th Mich. Col. Joshua Chamberlain, 20th Maine, was told, “this is the extreme left of our general line” which he was to “hold that ground at all hazards.”

The right flank came under assault from the 4th Ala., 4th and 5th Texas. From the Spur “… a sheet of smoke and flames burst from our whole line.” Dead and wounded attackers tumbled intertwined downhill. “Now it was expected that our men having tried it and seeing the impossibility of taking the place would have refused to go in again”, recalled a 5th Texas soldier. “But no, they tried it a second time”.

C.S. Gen. Evander Law’s Alabama Brigade, moving forward, came under fire from U.S. Maj. Homer Stoughton, 2nd Sharpshooters from the foot of Big Round Top. C.S. Col William Oates, 15th Ala., went after the retreating Sharpshooters; climbing up, “catching to the rocks and bushes and crawling over the boulders in the face of the fire of the enemy”, chasing the Federals off the mountain. Earlier, the men had marched 28 miles in 11 hours in the hot, muggy weather. As his men rested from exhaustion and thirst, Oates surveyed the battle from the high point, while envisioning hunkering down in this choice location. Oates’ men had sent their canteens to be refilled just before the advance was ordered. The detail following with the canteens were captured but not Cpt. Leigh Terrell on horseback. He had orders from Law “to press on … and capture Little Round Top, if possible, and to lose no time.”

Heeding Warren’s call for help, U.S. Lt. Charles Hazlett’s Battery D, 5th U.S. Artillery, consisting of six 10-pdr Parrot rifles, hauled their unwieldy guns over rocky ground to the summit, “at a trot, each man and horse trying to pull the whole battery by himself.” Warren pointed out that due to the steep slope, it was impossible to aim the guns towards its base. Hazlett responded, “The sound of my guns will be encouraging to our troops and disheartening to the others, and my battery is of no use if this hill is lost.”

As ordered, Oates headed his men downhill and up the slopes of Little Round Top. To their surprise, about 40 steps from the Spur the Federals opened fire. Through the smoke, Oates could see the 20th Maine “running from tree to tree westward”. Oates swung his line to attack from the federal rear. “Forward men to the ledge!” Oates shouted as he brandished his sword. “The front surged backward and forward like a wave.”

Warren, helping Hazlett’s battery, spotted a 5th Corps column passing below. Riding down to intercept it, Warren recognized the man at its head, Col Patrick O’Rourke, 140th N.Y. “Paddy, give me a regiment”, Warren said. O’Rourke protested that U.S. Gen. Stephen Weed, 3rd brigade, 2nd Division, expected him elsewhere. “Never mind that,” Warren interjected. “Bring your regiment up here and I will take the responsibility.”

On the far right, mistakenly believing a retreat had been ordered, a third of the 16th Mich. followed its flag towards the rear. The rebels surged towards the collapsing line. Vincent waving his riding crop, leaped onto a rocky perch yelling, “Don’t give an inch boys. Don’t give an inch!” Vincent dropped, shot in the thigh, mortally wounded.

Into the breech arrived the 140th, with unloaded guns. “No time now, Paddy, for alignment,” Warren shouted. “Take your men immediately into action.” O’Rourke ran forward. “Here they are men”, he yelled. “Commence firing.” The lines erupted as both sides obeyed. O’Rourke was mortally shot in the neck as his men rushed forward, energizing the entire federal line.

On the summit, Weed joined the battery. Weed remarked, “I would rather die here than the rebels should gain an inch of ground”. Weed was mortally shot in the chest. Hazlett was killed as he leaned over trying to catch his words. The battery kept up their continuous firing until after dark.

Instead of bringing reinforcements, Oates’ messenger reported, “that none of our troops were in sight … and the enemy were closing in our rear.” Oates’ initial impulse was to reject a retreat and “sell out as dearly as possible.” He reconsidered, “but did not undertake to retire in order”. Instead, when the signal was given everyone should run back to Big Round Top.

On the far left, Chamberlain had already extended his line into a reverse “J” to counter Oates’ flanking move. Now his men were firing their last cartridges. Desperate, his shout of “Bayonets” was passed down the line. In front of the color guard lay Maine’s wounded. Lt. Homan Melcher decided to move them before the charge. The color bearers followed their officer. The right and left wings of the 20th rushed after the flags as Chamberlain yelled, “Charge!” Oates gave the signal and as he later wrote, “we ran like a herd of wild cattle.”
© History In Full Color
User Agreement
Cancel
Continue