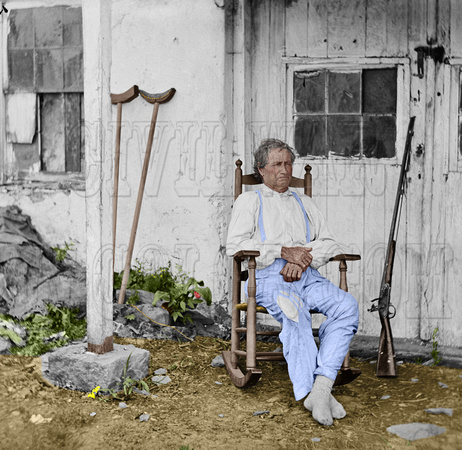 Born in 1793, John Burns had already fought in the war of 1812 and later volunteered for the Mexican-American War. By the time the Civil War started in 1861 he was already 68, but once again quickly volunteered. This time however he was rejected. A sad and empty Burns was sent home to quietly sit out the war in Gettysburg, until the war came to him.


On June 26th, 1863 he was jailed for resisting the invading Confederate army. When the battle of Gettysburg started on July 1st, the Confederates retreated from the town and Burns was released. He, then in turn, arrested several Confederate stragglers and continued to resist single-handedly until relieved by Union forces. Not to miss his opportunity, he grabbed his flintlock and powder horn and marched off to war.

After borrowing a modern rifle from a wounded soldier, he asked to fall in with the nearest regiment. He fought first with the 7th Wisconsin and later the 24th Michigan. Wounded both in the arm, and leg and with minor chest wounds, he was left behind during a retreat. Burns left his rifle and ammunition, crawled away and was found by the Confederates. Convincing them that he was a civilian that had been wounded looking for his invalid wife, he was treated and released.

After the battle he was received as a national hero. Upon arriving in Gettysburg several months later, Lincoln insisted on meeting Burns. The following year, Bret Harte (future associate of Mark Twain's) wrote a poem.
© History In Full Color
User Agreement
Cancel
Continue