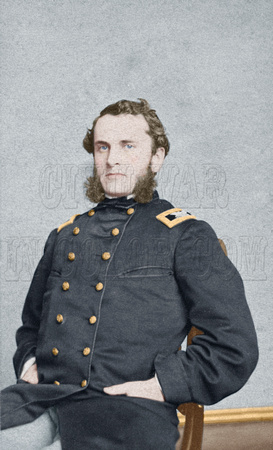 “What death more glorious can any man desire than to die on the soil of old Pennsylvania fighting for that flag?” – Col. Strong Vincent

On July 2, 1863, near the George Weikert house on Cemetery Ridge, U.S. Col Strong Vincent, was waiting at the head of the 3rd brigade, 1st division, during the second day of the Battle of Gettysburg, Penn.

Noticing U.S. Gen George Sykes’ aide, Vincent rode forward asking, "Captain, what are your orders?" The captain replied, "Where is General [James] Barnes?" Vincent said, "What are your orders? Give me your orders" The captain answered, “General [George] Sykes told me to direct General Barnes to send one of his brigades to occupy that hill yonder,” pointing to Little Round Top. Vincent said, "I will take the responsibility of taking my brigade there."

Although a lawyer in civilian life, Vincent knew to position his men not on top of the summit but on the crest below. As the battle raged below at Devil’s Den, Vincent concluded the top priority was to defend the western and southern slopes. He selected a ledge, known afterwards as Vincent’s Spur, as the spot to place his men.

Shells began exploding on either side of Vincent and Pvt. Oliver Norton, who bore the brigade headquarters flag. “They are firing at the flag, go behind the rocks with it,” yelled Vincent. As the Confederates approached from the woods, Vincent gave instructions and encouragement as he positioned the 44th N.Y., 83rd Penn., 20th Maine and the 16th Mich. Col. Joshua Chamberlain, 20th Maine, was told, “this is the extreme left of our general line” which he was to “hold that ground at all hazards.”

The right flank came under assault from the 4th Ala., 4th and 5th Texas. From the Spur “… a sheet of smoke and flames burst from our whole line.” Dead and wounded attackers tumbled intertwined downhill. “Now it was expected that our men having tried it and seeing the impossibility of taking the place would have refused to go in again”, recalled a 5th Texas soldier. “But no, they tried it a second time”.

From the summit, U.S. Gen. Gouverneur Warren spotted a 5th Corps column passing below. Riding down to intercept it, Warren recognized the man at its head, Col Patrick O’Rourke, 140th N.Y. “Paddy, give me a regiment”, Warren said. O’Rourke protested that U.S. Gen. Stephen Weed, 3rd brigade, 2nd Division, expected him elsewhere. “Never mind that,” Warren interjected. “Bring your regiment up here and I will take the responsibility.”

On the far right, mistakenly believing a retreat had been ordered, a third of the 16th Mich. followed its flag towards the rear. The rebels surged towards the collapsing line. Vincent waving his riding crop, leaped onto a rocky perch yelling, “Don’t give an inch boys. Don’t give an inch!” Vincent dropped, shot in the thigh, mortally wounded.

Into the breech arrived the 140th, with unloaded guns. “No time now, Paddy, for alignment,” Warren shouted. “Take your men immediately into action.” O’Rourke ran forward. “Here they are men”, he yelled. “Commence firing.” The lines erupted as both sides obeyed. O’Rourke was mortally shot in the neck as his men rushed forward, energizing the entire federal line.

The fight ended with the 20th Maine’s Col. Joshua Chamberlain leading the charge to drive the confederates off Little Round top. On the evening of July 2nd, U.S. Maj. Gen. George Meade recommended the promotion of Vincent to Brigadier General. His commission was read to him on his deathbed. Previously, Vincent had written to his wife, "If I fall, remember you have given your husband to the most righteous cause that ever widowed a woman."
© History In Full Color
User Agreement
Cancel
Continue