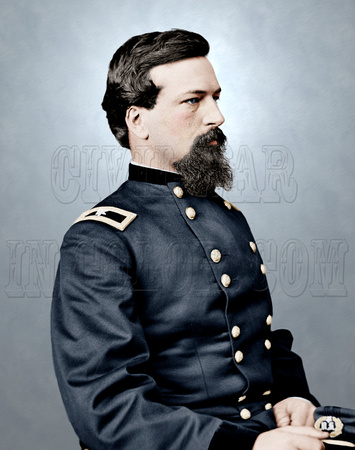 "In every battle and on every important field there is one spot to which every army [officer] would wish to be assigned -- the spot upon which centers the fortunes of the field. There was but one such spot at Gettysburg and it fell to the lot of General [Alexander] Webb to have it and to hold it and for holding it he must receive the credit due him." U.S. Gen. Winfield Scott Hancock

On July 3, 1863, during the third day of the Battle of Gettysburg, Pa., II Corp's U.S. Gen. Alexander Webb's Second (Philadelphia) Brigade, held the Union line at the center of Cemetery Ridge. The Brigade became the focal point of what became known as "Pickett's Charge". "Pickett's Charge" was Confederate Gen. Robert E. Lee's plan to send 12,500 men to punch through the center of the Union's line and move deeper into the North.

About 1:00 p.m., Lee began his prolonged bombardment Cemetery Ridge. Webb was convinced "that an important assault was expected." He seized the time to prepare for the upcoming battle by arranging for fresh battery units and moving his infantry.

As Confederate Gen. Richard Garnett's Brigade came within 250 yards of the stone wall the Philadelphia Brigade unleashed their firepower. Overwhelmed, "the fight soon became awful. We mowed the rebs right and left but still they came on. We had to retreat," wrote Sgt. William Burns of the 71st.

Garnett's men surged forward capturing the wall. The 72nd began firing, their volley hitting Garnett who fell dead. Webb sprinted over to the 72nd and gave the order "charge bayonets". But over the racket of battle his order, "couldn't be herd, I don't suppose ten feet away."

Convinced the 72nd would not move, Webb set off towards the 69th who were still fighting at the wall. The Confederates, catching sight of an officer targeted Webb. Webb survived the hail of bullets with only a graze to his thigh.

Confederate Gen. Lewis Armistead, twirling his hat on his sword, then led the way to his death as men followed him over the wall. Webb ordered three companies to change front to right to combat the tide. Cpt. Andrew Cowan's battery mowed the enemy with their guns and the 71st fired their 300 scavenged riffles into the sea of grey.

Nonetheless, Webb's position was being overwhelmed. U.S. Gen. Winfield Scott Hancock ordered the 19th Massachusetts and 42nd New York to, "Go in there pretty quick." They charged into the breach, pushing the Confederates out of the clump of trees to the wall.

Into the fray, the 72nd charged and the 71st joined them. "[Webb] went right in front of us and led us when we gave a yell and charged on them and drove them back with great slaughter", asserted Sgt. William Burns of the 71st.

The fighting turned into pandemonium. According to Cowan, "... I do not think ...there was such a thing as regiments. The men were fighting pretty much at will."

As more Federals poured into the area, the Confederates realized the fight was futile. The men held up their hands as token surrender. The “sharp, quick huzza of the Federals told of our defeat and their triumph,” wrote Lt. George Finley of the 56th Virginia.

"I ordered no man to go when I would not go myself", Webb wrote in a letter to his wife. For his actions at Gettysburg, Gen. Alexander Webb was awarded the Medal of Honor.
© History In Full Color
User Agreement
Cancel
Continue