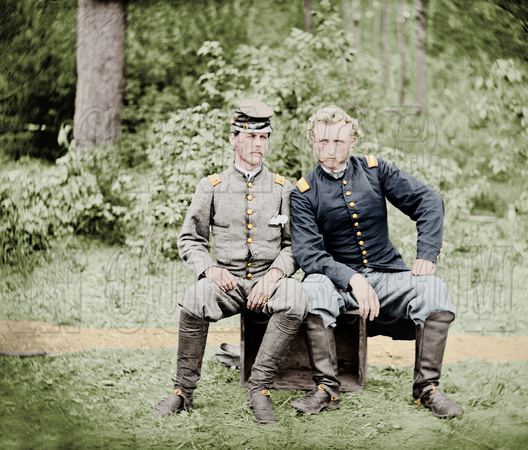 Friendships forged at West Point remained immune to the War. On May 31st, 1862, Confederate Lt. James B. Washington was captured and escorted to Gen McClellan's headquarters. There, Washington asked for fellow West Pointer Custer. Custer asked McClellan if the prisoner could be his guest for what time he would be kept in Union lines. He also gave Washington some money when he was sent to the rear. It was a gesture that the prisoner and his family never forgot.

Elizabeth Custer records the rest of the tale in her diary:

"Lt. Washington was exchanged, and was fighting with the enemy again when Custer, now a General, was campaigning with Sheridan in the Shenandoah Valley. One day a servant came from an estate they were passing, to Custer, saying his mistress would like to speak with him.

Mrs. Washington had sworn that she would never would speak to a Yankee, but her son had told her that she must make an exception of Custer should he ever come her way, and now she wanted to thank him for his kindness to her son. She did more; she forced him to accept a gift, a precious heirloom in the family, one of a set of buttons from a coat made for and worn by George Washington.

Then, though her hospitable instincts would have detained him she hurried him away to catch up with his column, lest the Confederates should get him."

Custer would later have the beautifully carved conch-shell button with a silver shank, set as a brooch, to give as a wedding present to his bride.
© History In Full Color
User Agreement
Cancel
Continue