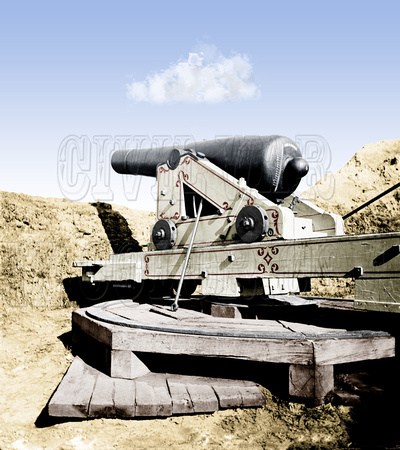 "He was struck by a shell on the back of the head which tore the whole back off down to the neck leaving only the face. It was indeed a sad affair and it cast a gloom over the entire garrison for he was much beloved by all." 1st Lt Dixon

On February 1, 1863, Major John B. Gallie was killed when the ironclad USS Montauk and a flotilla of gunboats bombarded Ft. McAllister.

The 56 year old Gallie, had assumed command of the fort on November 25, 1862. The wealthy businessman from Savannah had previously been the leader of the Chatham Artillery. After a rocky start, within two months Gallie had won the confidence of his men, the Republican Blues.

Pictured, is the 8-inch columbiad served by Capt. William Daniel Dixon and his gun crew. A member of the Republican Blues noted on an 1863 sketch map of the fort, that to honor their fallen commander, the Gun was named Gallie. "John B. Gallie" was added to the "6" on the cascabel.

As part of Sherman's "March to the Sea", Fort McAllister was captured by the Union on December 13, 1864. On December 16th & 17th, photographer Sam Cooley was able to take pictures of the fort. The decorative pin striping on the carriage and truck is not seen on any other gun documented by Cooley.

All of the guns of Ft. McAllister were removed shortly after the capture. The ultimate fate of the Gallie gun is unknown.
© History In Full Color
User Agreement
Cancel
Continue