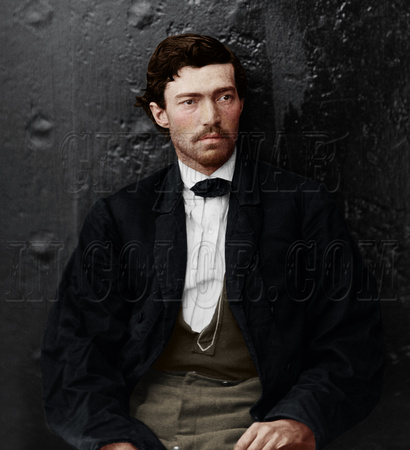 Samuel Bland Arnold was born in 1834 and was 30 at the time of the Lincoln Assassination. As one of the early conspirators, he was involved in the original plot to kidnap President Lincoln. By the time of the assassination he had dropped out of the conspiracy and was not directly involved.

Since he had participated in the kidnap plot, he was sentenced to life in prison. Along with Dr. Mudd, Michael O’Laughlen and Edmund Spangler he served his time in Fort Jefferson, which is an island fort in the area known as the Dry Tortugas, in Florida.
Fort Jefferson started as a lighthouse for the Navy in 1826. Construction of the fort began 20 years later in 1846 and was still continuing during the Civil War. By the time the conspirators arrived in 1865, it was being used primarily as a prison for both military and civilian convicts. Arnold, along with Dr. Mudd and Edmund Spangler was pardoned in 1869 (Michael O’Laughlen had died in prison in 1867) by President Johnson.

Following his release, Arnold lived quietly out of the public limelight. In 1906, he died at the age of 72.
© History In Full Color
User Agreement
Cancel
Continue