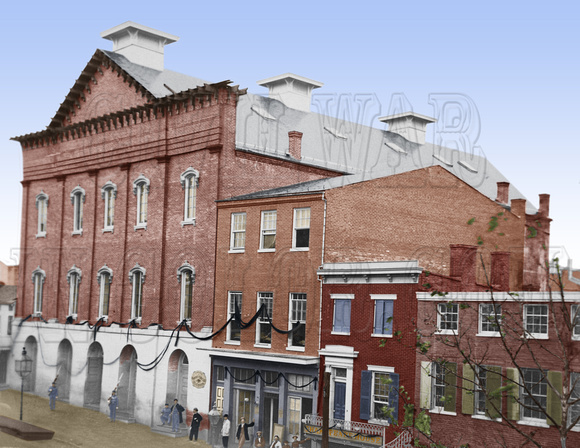 The building we now know today as Ford's Theatre, was constructed in 1833. It served as the First Baptist Church until 1859. In 1861, John Ford leased the building and renovated it as a theatre. With the outbreak of war, the residents of Washington looked to escape by going to the theatre and it became a popular spot. Ford's was able to provide audiences a variety of shows starring famous actors. Lincoln himself had attended performances as early as 1862. It was at Ford's that Lincoln saw, The Marble Heart, starring a then 24-year-old John Wilkes Booth.


John Ford's brother, James, was in charge of the theatre on Friday, April 14th, 1865. It had been decorated in honor of Lincoln's twelfth visit, to see a performance of Our American Cousin, starring Laura Keene. Proprietor John Ford had a rocking chair, now referred to as the "Lincoln Chair", moved into the President's Box for Lincoln's comfort. Unfortunately, during intermission, Lincoln’s bodyguard went into the lobby bar for a drink. He doesn't return for the start of Act 3. John Wilkes Booth, however, arrives at the theatre during the beginning of Act 3.


Following the assassination, Ford attempted to reopen the theatre. After receiving an anonymous letter threatening to burn the theatre down if it reopens as a place of amusement, Ford is forced to close the theatre.


Sold to the federal government, it was used as a warehouse for decades. A collapse of all three floors in 1893 killed 22 people and again marked it as a place of death. In the 1960's a movement was made to restore the theatre as it would have been in Lincoln's time. Ford's Theatre was named a National Historic Site on June 23, 1970. Today, it has returned to a working theatre that honors both its acting heritage as well as its place in history.
Restoration and colorization copyright 2014 by HistoryInFullColor.com
User Agreement
Cancel
Continue