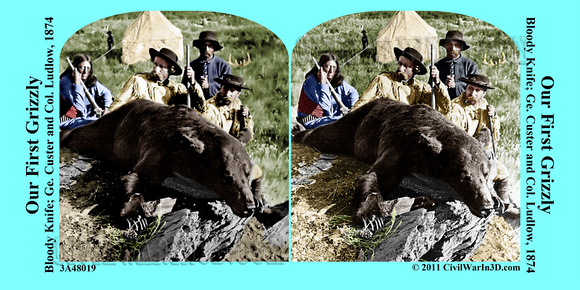 Custer’s activities following the war were nearly as turbulent as during the war. Promoted to Major General at the end of the war, his rank was reduced to Captain within a year. His wartime rank had been as commander of a volunteer unit. With the war over, the unit was mustered out. He was offered (but refused) $10,000 in gold to fight against Maximilian in Mexico. Custer considered various business opportunities in railroad, mining and even a run at Congress but he stayed in the army.

To Custer, it seemed that Bloody Knife could do no wrong. Even his insults and ridicule of white soldiers amused Custer, who often gave him gifts. In 1874, when this picture was taken, he led the 7th Cavalry in the Black hills of Dakota Territory due to the discovery of gold. Bloody Knife worked with Custer until the battle of Little Big Horn, where he was killed as part of Major Reno’s detachment.

During Custer’s expedition into the Black Hills, his Chief Engineer was Colonel Ludlow. A Civil War veteran himself, Ludlow had graduated from West Point in 1864. Despite entering the war with less than a year before the completion, he managed to be promoted to brevet Lieutenant Colonel. Following the war he worked in the Corps of Engineers and was assigned to manage mapping of the Black Hills with the 7th Cavalry. With his mission complete, he left the unit and was not present at Little Big Horn. Ludlow ultimately reached the rank of Major General and was buried in Arlington following his death in 1901. Anthony Hopkins portrayed a highly fictionalized Ludlow in the movie “Legends of the Fall” in 1994.
© History In Full Color
User Agreement
Cancel
Continue