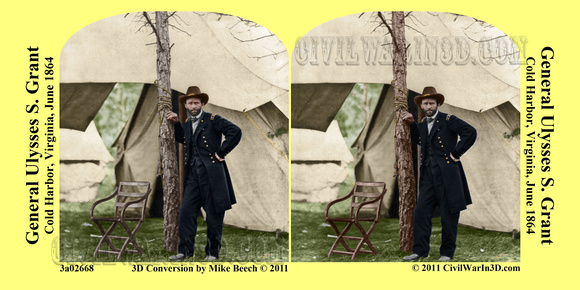 By the time that the Battle of Cold Harbor began on May 31st 1864 Grant had been chasing Lee for a month and knew that his men could not take much more. With nearly a 2 to 1 advantage Grant could afford to push his men against Lee’s and secure a victory. Just 10 miles from Richmond this could prove the beginning of the end. Instead the end was still nearly a year away and Lee’s men were not as exhausted has Grant had calculated.


Both sides immediately began digging trenches to secure their own lines. Within three days the lines extended seven miles and by June 3rd the Union Army was ready to attack. At 4:30 in the morning the Union army took advantage of the dense fog and began to advance on the Confederate positions. In their well-fortified positions the Confederates were able to direct fire repeatedly on the Union line. Failing to take the Confederate positions, Grant acknowledged shortly after noon that they had failed.


Fighting continued however for another week. As the losses grew on the Union side Grant surprised Lee by pulling his army back and moving toward Petersburg. By doing this he allowed Lee his last win in battle and setup a siege that would last the rest of the war. The statistics of Cold Harbor show how futile the Union attempt was. The Confederate army had only 83 killed during the battle while the Union dead was more than 22 times that with 1844 killed. Overall casualties was closer with 13,000 for the Union to 5,000 for the Confederates. In his memoirs Grant claimed that the last assault at Cold Harbor was the only one he wished he had not ordered. Still, with more resources and the strength to continue Lee was only biding time before he surrender his army the following spring.


Note: only one side of this stereoview exists. 3D conversion was performed manually resulting in superior stereo view.
© History In Full Color
User Agreement
Cancel
Continue