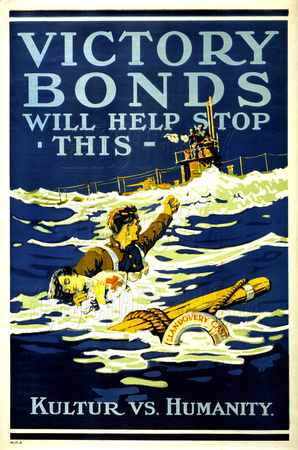 On June 27, 1918, during one of the worst war atrocities of WWI, a German submarine torpedoed the Canadian hospital ship Llandovery Castle. To cover up the incident, the U-boat captain ordered the lifeboats to be rammed and the survivors machined-gunned in the water. The submarine overlooked one lifeboat containing 24 survivors.

Canada, the United Kingdom and the United States widely spread the survivors' account of the sinking and the death of the 234 doctors, nurses and patients aboard the ship.

Title: Victory Bonds Will Help Stop This. Kulture vs. Humanity


Summary: Poster shows a Canadian soldier holding a drowned Red Cross worker and raising his fist at the sailors on the nearby German submarine. Poster is a reference to the sinking of the Canadian Red Cross transport ship Llandovery Castle.

This image has been restored of damage and the colors have been balanced to appear as they would have when the image was new.


This is a Classic World War I fundraising poster from the collection of the Library Of Congress.
© History In Full Color
User Agreement
Cancel
Continue