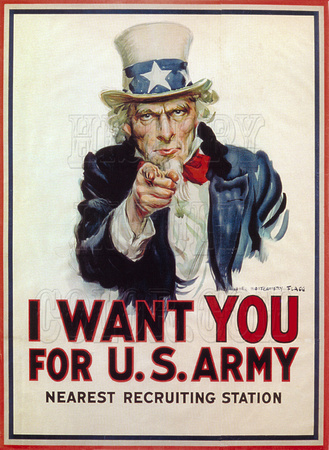 On April 6, 1917, Congress formally approved declaring War on Germany. Now, the United States needed to quickly fill the ranks of the military to fight in WWI. In a world without television, posters were the go to advertising media.

Today, when we think of the image of “Uncle Sam”, we are thinking of the iconic poster James Montgomery Flagg created depicting Uncle Sam pointing directly at the viewer proclaiming: “I Want You for U.S. Army.”

“That pose was from a sketch of Lord Kitchener, who was the British Secretary of War, who did a similar thing,” says David D. Miller III, Smithsonian curator in the division of armed forces history. “The famous UK 1914 poster shows Kitchener pointing his finger, says ‘Britons Want You: Join Your Country’s Army.’”

According to Miller, Flagg was his own model. He “added the beard and white hair and Uncle Sam costume to it.”
“So the image most of us have of Uncle Sam is that of the illustrator Flagg, imagining himself an older man in white hair in beard. He was a much younger man at the time, but as he grew older, he came to very much resemble that ‘I Want You’ poster,” Miller reveals.


This image has been restored of damage and the colors have been balanced to appear as they would have when the image was new.
© History In Full Color
User Agreement
Cancel
Continue