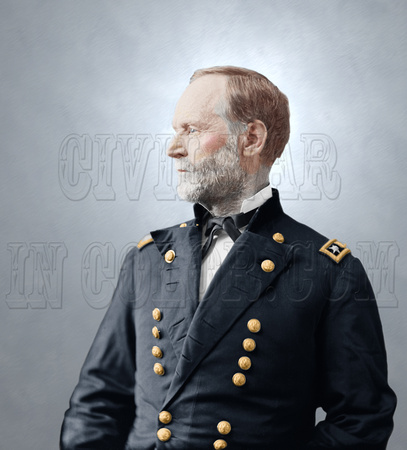 04445 - William Tecumseh Sherman; General of the Army of the United States

(I am), "sick and tired of fighting - its glory is all moonshine ...'tis only those who have never heard a shot, never heard the shriek and groans of the wounded and lacerated ... that cry aloud for more blood, more vengeance, more desolation." William Tecumseh Sherman, after the last rebel army surrendered


Sherman's troops entered Columbia, South Carolina about noon on February 17, 1865. By the next morning, Columbia had been destroyed by fire. In his memoirs Sherman wrote:


"In my official report of this conflagration I distinctly charged it to General Wade Hampton, and confess I did so pointedly to shake the faith of his people in him, for he was in my opinion a braggart and professed to be the special champion of South Carolina."


The destruction of Columbia can be attributed to the growing anger of the army rank and file as they moved towards the capitol of the first state to secede.


"There was a grim determination on the part of the men in the ranks to visit a severe judgment on South Carolina...We practically burned a swath 60 miles wide across...The Commanders were powerless...This destruction of property was a matter of revenge", wrote an Union soldier.


During the day, looting occurred. By nightfall, hundreds of fires had been started. A fierce wind helped spread the fire creating "a tornado of flame".


Sherman, who had just finished supper at his headquarters, stepped out into the yard, "saw the darkness lit up with the lurid hue of conflagration" and remarked, "They have brought it on themselves."


Sherman and his generals did give out instructions for putting out the fires but didn't order clearing out the town of the troops.


The next morning, wrote Private John C. Arbuckle, "the city was a scene of smoldering ruin."


"Though I never ordered it and never wished it, I have never shed many tears over the event, because I believed it hastened what we all fought for, the end of the war", Sherman wrote.
© History In Full Color
User Agreement
Cancel
Continue