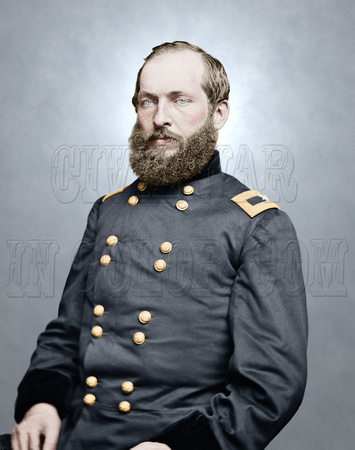 Despite his seemingly perpetual search for a General willing to fight combined with the ability to win battles, Lincoln asked Garfield to resign from the Army. Without any effort on his part, ten months after becoming famous for his victory at the Battle of Middle Creek, Kentucky, James Garfield was elected to the US Congress. Lincoln's request came from his need for votes in the House. He especially needed someone who understood the wants of the Army. Garfield felt that despite his personal desire to stay in the Army, he could not ignore the request.


To his surprise, Garfield found he could fight and win more often in Congress. Garfield served seventeen years in Congress before being elected President of the United States. During his tenure, he championed the cause that compelled him to join the Army - abolition.
Restoration and colorization copyright 2014 by HistoryInFullColor.com
User Agreement
Cancel
Continue