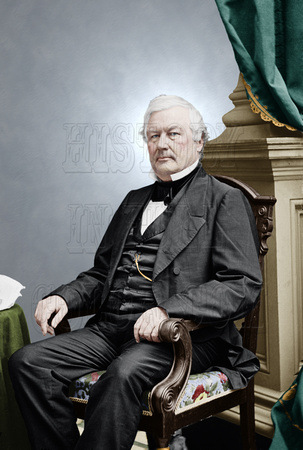 Millard Fillmore (January 7, 1800 – March 8, 1874) was the 13th President of the United States (1850–1853), the last Whig president, and the last president not to be affiliated with either the Democratic or Republican parties. Fillmore was the only Whig president that did not die in office or get expelled from the party, and Fillmore appointed the only Whig Supreme Court Justice. He is consistently included in the bottom 10 of historical rankings of Presidents of the United States.[by whom?] As Zachary Taylor's vice president, he assumed the presidency after Taylor's death. Fillmore was a lawyer from western New York state, and an early member of the Whig Party. He served in the state legislature (1829–1831), as a U.S. Representative (1833–1835, 1837–1843), and as New York State Comptroller (1848–1849). He was elected vice president of the United States in 1848 as Taylor's running mate, and served from 1849 until Taylor's death in 1850, at the height of the "Crisis of 1850" over slavery.

As an anti-slavery moderate, he opposed abolitionist demands to exclude slavery from all of the territory gained in the Mexican War. Instead he supported the Compromise of 1850, which briefly ended the crisis. In foreign policy, Fillmore supported U.S. Navy expeditions to open trade in Japan, opposed French designs on Hawaii, and was embarrassed by Narciso López's filibuster expeditions to Cuba. He sought re-election in 1852, but was passed over for the nomination by the Whigs.

When the Whig Party broke up in 1854–1856, Fillmore and other conservative Whigs joined the American Party, the political arm of the anti-immigrant, anti-Catholic "Know-Nothing" movement, though he himself was not anti-Catholic. He was the American Party candidate for President in 1856, but finished third. During the American Civil War, Fillmore denounced secession and agreed that the Union must be maintained by force if necessary, but was very critical of the war policies of President Abraham Lincoln. After the war, he supported the Reconstruction policies of President Andrew Johnson.
© History In Full Color
User Agreement
Cancel
Continue