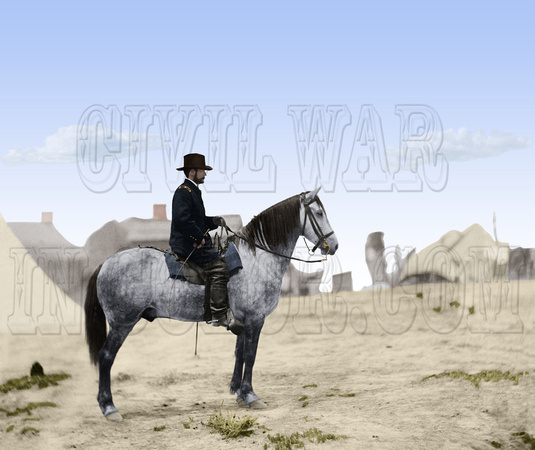 General Alfred Pleasonton, when the Civil War broke out was considered one of the best horseman of the Army. During an August 17, 1880 interview with the New York Times, Pleasonton was asked, "Of all the officers in the Army whom you knew, which one had the best horse?"

"I had", he answered quickly. "I bought him, a chestnut stallion, from Prince de Joinille. He was the finest horse in the Army of the Potomac. The Prince paid $3,000 for him, and I bought him when the Prince was going away for $600. Oh, but he was a beauty! He was as gentle as a lamb, with the courage of the devil and the speed of the wind. Then he had bottom. He could go without eating or drinking and was as pretty as a woman. He was a thorough-bred, and had been most carefully broken. He would jump fences and ditches or anything before him. I left him in charge of a bugler one day, and that was the last I ever saw of either the bugler or the horse."
Restoration and colorization copyright 2014 by HistoryInFullColor.com
User Agreement
Cancel
Continue