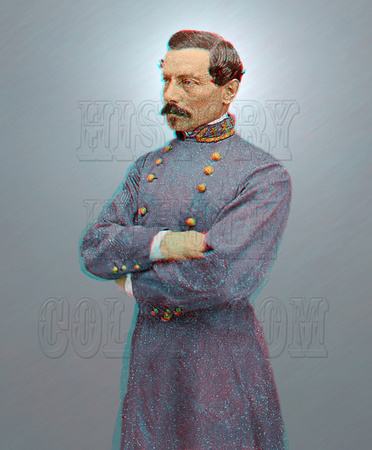 
Born just 20 miles outside of New Orleans in 1818 Pierre Gustave Toutant Beauregard grew up in a French-Spanish Creole family attending private schools in New Orleans before attending a “French school” in New York. He did not learn to speak English until he was 12. Attending West Point for the Class of 1838 he was trained by his later adversary, Robert Anderson. Excelling on both artillery and engineering he was quickly made a Captain during the Mexican-American War. It was during that war that he met Robert E. Lee. The two became rivals and he always felt that Lee was given credit for work that Beauregard performed.


Following that war he continued his engineering duties that included rebuilding of forts and improving shipping on the Mississippi. Just prior to the start of the war he had been appointed to West Point and left New York to return to Louisiana.

The Confederates assigned General Pierre Beauregard to be the head of the military in Charleston. It was here that student and teacher would be opponents. Beauregard demanded Anderson’s surrender of Sumter in 1861, before ordering the shelling that began the war on April 12th.


Following Fort Sumter he participated in the First Battle of Bull Run (First Manassas) a few months later. He was also engaged during Shiloh, Corinth, Petersburg and the defense of Sumter from Union attack.

Promoted to Brigadier General in 1861 he would eventually become the fifth most senior general in the Confederate Army. By April of 1865 he used that position and influence (along with his commander General Johnston) to help convince President Davis that it was useless to continue the war.


Following the war he returned to engineering, this time for the railroad and was President of the Great Northern until 1870. As supervisor of the Louisiana Lottery in 1877 he managed to create a sizeable amount of wealth.

In 1870 the Governor of Virginia appointed Beauregard to be the Grand Marshall for Robert E. Lee’s funeral. He refused saying "We have always been enemies. I cannot pretend I am sorry he is gone. I am no hypocrite." Beauregard himself died in his sleep in New Orleans at age 74 in 1893.
© History In Full Color
User Agreement
Cancel
Continue