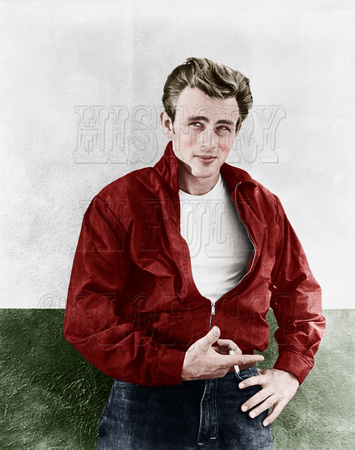 "I studied bullfighting in Mexico, and I know all about it." – James Dean

James Dean had a lifelong interest in fast cars, motorcycles and bull fighting. While living in California, Dean occasionally drove to Tijuana, Mexico to see the bullfights.

One of Dean’s cherished procession was a bloody cape, gifted to him by Brooklyn-born matador Sidney Franklin, a friend of Ernst Hemingway.

Dean would practice bullfighting on passing cars in the streets of New York City. He told a friend that “if you could face a live bull in a bull ring with people watching and hollering, a theater audience would certainly seem tame by comparison.”

Confident in his knowledge, Dean got a job coaching actor Ray Danton traditional matador moves for a television drama. He “showed up in Levi's and a ragged jacket with a cape and two swords under his arm.” The Director recalled, “I found out later that everything he knew about bullfighting came from a book, but he taught Danton how to perform the movements.”

Dean would later star in East Of Eden, Rebel Without A Cause and Giant. He “would sometimes use that 'head-down, eyes-up look, staring at you dead-on,' which comes from staring down the bull” in his work.

After his death in a car crash on September 30, 1955, Dean would become the first actor to receive a posthumous Academy Award nomination for Best Actor for his work in East of Eden and with his nomination for Giant, remains the only actor to have had two posthumous acting nominations.

Dean is pictured wearing the iconic jacket from Rebel Without A Cause.
© History In Full Color
User Agreement
Cancel
Continue