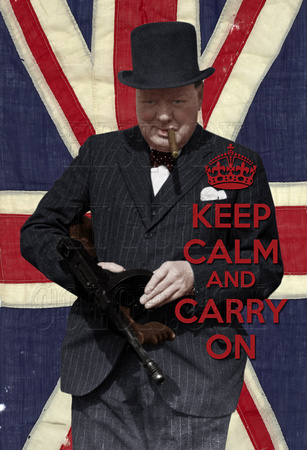 "If this long island story of ours is to end at last, let it end only when each one of us lies choking in his own blood upon the ground" – Winston Churchill

The fate of Britain was dire in the summer of 1940. On June 4th, the last of the British troops were evacuated from Dunkirk. On June 22, France had surrendered. Britain had come to a crossroads, it could explore peace with Germany or fight. Aside from the belief that Hitler would not respect any treaty, Prime Minister Winston Churchill deemed the British had to go down fighting. “… if Britain continued to fight,” Churchill said, “she could provide a beacon of resistance and, in time, a base from which Europe could be reclaimed.”

On July 31, 1940, as part of his tour of coastal defenses to raise public morale, Churchill tried out an American 1928 Tommy Gun or Thompson SMG (SubMachine Gun) at a coastal defense fortification near Hartlepool, England.

Between the pin striped suit and the Tommy gun, Hitler thought Churchill look like an American gangster. The Germans distributed a leaflet using the picture as part of a “Wanted” poster, “for incitement to MURDER.” The reverse of the leaflet is all text:

This gangster, who you see in his element in the picture, incites you by his example to participate in a form of warfare in which women, children and ordinary citizens shall take the leading parts. This absolutely criminal form of warfare which is forbidden by the Hague Convention will be punished according to military law. Save at least your own families from the horrors of war!

Dropping the leaflets onto London back fired for the Germans. Londoners were delighted by the image of their gun toting Prime Minster and the leaflet became a prized possession.

In 1939, the British public were underwhelmed with the slogan “Keep Calm And Carry On”. Faced with the possibility of a German invasion, it was created as a series of propaganda posters to raise public morale. The slogan was revived after a bookstore discovered a copy of the poster in a box of old books in 2000 and has become recognized around the world. We decided to combine the image with the slogan.
© History In Full Color
User Agreement
Cancel
Continue