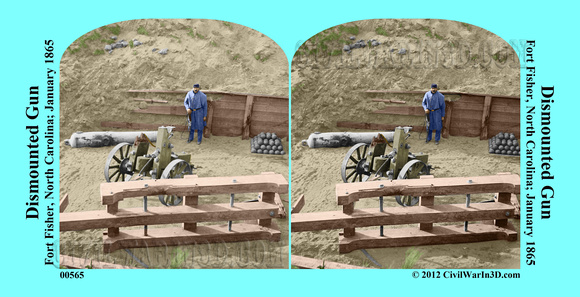 Fort Fisher, located at the mouth of the Cape Fear River was the largest Confederate fort in existence. Begun in the spring of 1861 it started as a coastal defense, but with the loss of Norfolk in 1862 the need for Fort Fisher grew. Originally designed for coastal defense it grew to be a major destination for blockade runners since its heavy artillery weapons kept for Union Navy from being able to approach.

With 22 guns along the shoreline and another 25 protecting approach from land Fort Fisher dominated the landscape for almost the entire war. At one point in 1864 the entire 36th North Carolina regiment of 350-400 men was quartered in the fort. Jefferson Davis even paid a visit to the fort in 1863. All of this did not go without notice in the North.

Due to its construction of mostly sand it was difficult for Union artillery to cause major damage to the fort. Shells were easily absorbed and would have little to no impact. The heavy amount of artillery on the other hand kept the Union Navy far offshore to stay out of harm’s way.

The Union finally began to take on the fort directly on Christmas Eve 1864. General Benjamin Butler was detached to take the fort and Admiral David Dixon Porter supported him from the sea. A direct shot managed to cause a large explosion in the fort and the Union Navy landed 1,000 soldiers on the beach. The Confederates countered and by the 27th Butler was forced to withdraw. This was counter to General Grant’s orders and Butler was replaced.

The second attempt was two weeks later headed by General Alfred Terry. For 2 ½ days the Navy bombarded the shoreline and then on the 15th of January 8,000 troops were landed. Within six hours it was all over and the fort was in Union hands. Since the loss of the fort came close to the end of the war it did not have much impact on the South. It was however just one more nail in the coffin.

Today the area is a popular recreation area known as Pleasure Island. Due to storm and sea conditions few of the original fortifications remain. Some reconstructions have been made and it is possible to visit and see some of what made this the “Southern Gibraltar”.
© History In Full Color
User Agreement
Cancel
Continue